Home  »  eSports • eSports Games   »   History of eSports Around the World

An Historical Account of the eSports Gaming & Betting Market. 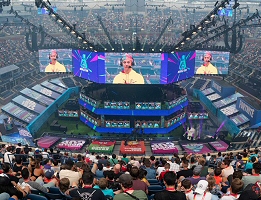 If you had to guess the origins of eSports – the year it all started – what would you say? Probably somewhere in the 1990s or early 2000s, right? After all, that’s when modern-age teenagers first gave up outdoor play for indoor video gaming. Thee more they played, the better they got at it, and the better they got, the more they played, eventually taking it to a competitive level.

You might be surprised to find out the origins of competitive electronic sports actually dates back all the way to 1972. That’s where our historical account of the history of eSports begins…

The very first video game tournament on record was held at California’s Stanford University on October 19, 1972. Students were invited to participate in a Spacewar! tournament. The winner was Bruce Baumgart, who received a one-year subscription to Rolling Stone magazine.

Spacewar! was an intergalactic combat game developed in 1962 by Steve Russell and a few other contributors. The computer game is ancient by today’s standards, but back then, it was revolutionary and, to this day, is regarded by the Library of Congress as one of the top ten most important video games every created. 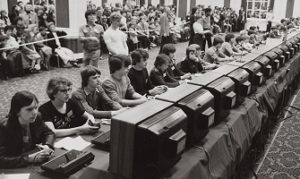 The next major competition didn’t occur until 1980 when Atari organize the first Space Invaders Tournament. Just two years after the game’s release, it was popular enough to attract more than 10,000 players from all over the US to partake in the tournament. Five regional winners won $150 each and earned a spot in the championship, where the winner, Rebecca Heineman, took home $2,000.

It was this tournament that kicked off the eSports gaming and betting craze we know today. Competitions were fueled by Twin Galaxies, an organization created to keep track of record-high video game scores; stats that were honored by the Guinness Book of World Records.

The launch of the Nintendo Entertainment System (NES) in 1985, followed by the Sega Genesis in 1989, and Super NES in 1991, kept the eSports community on their toes, but there’s no question that the influx of competitive eSports didn’t blaze a global trail until the introduction of the internet.

The internet did wonders for eSports. The 1990s saw pro leagues created around Quake, Counter Strike, and Warcraft. The 1997 Red Annihilation tournament drew 2,000 Quake players to the online event, where 16 qualified for the live championship in Atlanta, Georgia. It was all uphill from there.

Games developers began focusing on the creation of multi-player online games. Success came right around the time dial-up internet was exchanged for cable modems. Not everyone upgraded early on, but those who did were among the first leaders of elite mass multi-player online (MMO) competitors. This led to the explosion of MMO First-Person Shooters (MMOFPS) and Mass Online Battle Arena (MOBA) video games. These two genred have dominated the eSports betting and gaming market ever since.

Today, we look forward to the annual League of Legends Championships, The International (Dota 2), Call of Duty World League, Overwatch League (pictured above), CS:GO Major Championship, Starcraft II Masters, HALO World Cup, Fortnite World Cup and more. Magazine subscriptions and four-figure payouts are a thing of the past. Today’s top teams take home hundreds of thousands, if not millions of dollars in prizes.