The eSports Bettor’s One-Stop Guide to Competitive Dota 2 Gaming - Dota 2 is not your typical eSports title. It doesn’t feature a plethora of maps. It wasn’t designed with true-life graphics. Players don’t equip a progressive arsenal of melee weapons, explosives and firearms. This game is, in reality, an evolution of the most popular base-building game of all time, Warcraft III.
Home  »  eSports Games • eSports Reviews   »   Synopsis of Dota 2 eSports Gaming & Betting

Dota 2 is not your typical eSports title. It doesn’t feature a plethora of maps. It wasn’t designed with true-life graphics. Players don’t equip a progressive arsenal of melee weapons, explosives and firearms. This game is, in reality, an evolution of the most popular base-building game of all time, Warcraft III. Its creators removed the slow, monotonous building mechanics, spiced up the offense and defense, and the result was the most lucrative, organized eSport platform on the planet.

The original Warcraft III mod was called Defense of the Ancient, which quickly took on the short-hand title of DotA. It was so well received, Valve created a second generation game, separate from Warcraft, and called of Dota 2. One of the game’s original creators, ‘IceFrog’, came on board to help with the game’s design and production, and the stand-alone edition has become one of (if not) the most insanely popular competitive eSports games in existence.

eSports bettors have a love hate relationship with this game, and by that I mean they either love it, or they hate it. The problem is that it’s not so easy to follow, especially if you aren’t already ultra familiar with the game mechanics. One could easily look at a live stream and get dizzy from all the vibrant little creatures scurrying around, shooting equally colorful projectiles in all directions. Like I said, if you don’t play Dota 2 (or League of Legends, it’s essentially the same thing), you probably won’t understand much of what’s going on.

Most bettors are drawn to MMOFPS style games – that is, mass multi-player online first-person shooters. That’s because the vast majority of high-profile eSports are MMOFPS titles, like Call of Duty, CS:GO, and Overwatch. Dota 2 falls into a different genre of eSports known as MOBA, or massive online battle arena. MOBA games feature two teams of players tasked with two specific goals – defend your own base while destroying the enemy’s base.

If that sounds like your cup of tea, betting on Dota 2 should be a breeze. Since there is no long list of possible objectives for team’s to compete for, there’s really just one way to bet on it. Pick the team you think will win and cheer them on to hopeful victory. There’s nothing more wholesome than a straight up bet to win.

For specific details on how to conduct Dota 2 eSports betting, please refer to our previous segment:

Dota 2 has been among the top-grossing eSports tournament series in the world for years. It all began when Valve started promoting it as an eSport at Gamescon in the fall of 2011. By 2013, it had gained such a large audience, that tournament was renamed The International Dota 2 Championship in 2013, short-titled simply The International. From there, a host of smaller tournaments arose, proving the brand’s year round popularity. To purposefully misquote the old adage – if you host it, they will come!

Valve took to organizing multiple events just for Dota 2, and it wasn’t long before multi-game tournament leagues began picking up the title. It was soon integrated into major events like the Electronic Sports World Cup, DreamHack, Electronic Sports League (ESL) and World Cyber Games. Before 2011 came to a close, Dota 2 was the second highest paying eSports game, behind only StarCraft II.

Now, teams and betting enthusiasts are privy to a plethora of Dota 2 tournaments; more than 175 taking place all over the world, all throughout the year. Some of the largest Dota 2 events, by current prize pool, include:

Dota 2 Game Play at its Core

As previously stated, Dota 2 is a MOBA PC game that attracts hundreds of thousands of players to its servers at any given time. The object of every match is the same – destroy the enemy Ancient (building) while defending your own. As simple as that sounds, what has helped Dota 2 sustain such immense popularity all the years is the fact that every single game is different. 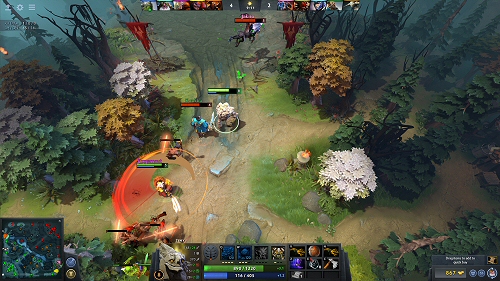 Dota 2 only utilizes a single map. The aesthetics of the map change with each game, but the overall landscape remains the same. What makes it so versatile is the multitude of heroes to choose from. There are more than 100 unique characters in all. Each one brings something different to the table, and when combining different characters into a team, the dynamics and strategy alter drastically. When implementing the collaborative instincts of the world’s best teams, no game mimics another.

Players traverse the map as their own character, either maneuvering in close proximity to the Ancient they are defending, or covering the bulk of the map as an enemy Ancient attacker. A variety of computer controlled ‘creeps’ also appear. These can fight for a specific team, or as neutral enemies of both teams. As each player progresses through the game, they acquire items, level up, and use their character’s special abilities to get the job done.

As with all team-based eSports games, cohesive collaboration is the key to victory. Teams must work together to choose the right strategy to complement their characters, leaving the best defenders behind and choosing the best path to infiltrate the enemies defenses.

How & Where to Watch Dota 2 eSports

As one of the planet’s most popular eSports, there is no shortage of Dota 2 live streams. You’ll find them flooding every free streaming service from Twitch, to YouTube, to Major League Gaming. Tournament hosts and producers also love to present live streams of their events via their official channels, some of which include:

What Dota 2 Teams are Worth Betting On?