Overwatch is not your typical MMOFPS (mass multi-player first person shooter) video game. It doesn’t draw fans based on the true-to-life realism of its graphics, but rather the 3D animation of fun, cartoon-style characters and vibrantly themed worlds. Its creators at Blizzard Entertainment put the focus on “cheery”, not “dreary”. Its popularity was highlighted by PCMag, which ranked Overwatch in its Top 10 Best PC Shooters for 2020, giving it 4 out of 5 stars.

The Overwatch League, or OWL for short, was founded in 2017 and held its inaugural season the following year. The first run was so successful, teams earned a combined total of US $3.5 million in prize pools. More than 10 million viewers tuned in over the course of week one, with 10.8 million tuned in for the championship finals. Those numbers are comparable to the viewership of regular season NFL games.

OWL is the official professional eSports league for Blizzard Entertainment’s Overwatch PC game. Blizzard announced its intention of launch the league at the 2016 Blizzcon. OWL is 100% organized and owned by Blizzard Entertainment, which – for those who may not be aware – is also the creator of popular eSports betting titles like League of Legends, Hearthstone, StarCraft II, and Warcraft / World of Warcraft.

The Overwatch League is currently made up of twelves teams. League seasons are structure much the same as most North American athletic sports leagues. All teams are scheduled to compete against one another to build a Win/Loss ranking, which determines the top seeds for playoffs. Six teams compete in the playoffs to determine a champion.

Fans of eSports betting are often drawn to Overwatch League for a number of reasons. The fun graphic style makes it as entertaining to watch as it is to play. The teams are immensely skilled and highly competitive. As one of the top ranked professional eSports leagues, every reputable iGaming operator from here to Neptune covers it.

For specific details on how to conduct Overwatch League eSports betting, please refer to our previous segment:

Overwatch Game Play at its Core

As with any MMOFPS, there is potential for millions of players to participate at the same time. The game’s mechanics randomly choose teams to play against one another. Teams can either be made up of grouped friends or random players. Each player competes in first-person shooter mode, working together with their team to complete an objective.

It is a very easy game to play, and only costs around $20 for the PC edition. Don’t expect to compete on anything close to a superior level out of the gate, though. Mastering the controls takes a great deal of experience and lightning quick reflexes. Gathering an entire team of masterful players who are able to work together cohesively and efficiently is a whole other matter, which is why millions choose to bet on this popular eSport, rather than attempting to play it professionally.

The best games to watch and wager on are those played between highly experienced teams, where everyone communicates and collaborates in an effort to meet victory conditions. If just one team member goes out on their own, it’s a clear sign that they are not all working in tandem, and therefore not a good choice for risking your hard earned money. But that’s something you never have to worry about with pro OWL teams.

How & Where to Watch OWL eSports

Blizzard Entertainment announced a partnership with YouTube in early 2020 for a multi-year contract designed to “provide world-class livestreaming for our fans”. You can access the official YouTube Overwatch League Channel here.

With so many players running around doing different things, OWL live streams are not so easy to follow; that is, if you don’t know what to watch for. There are three focal points viewers should be aware of. 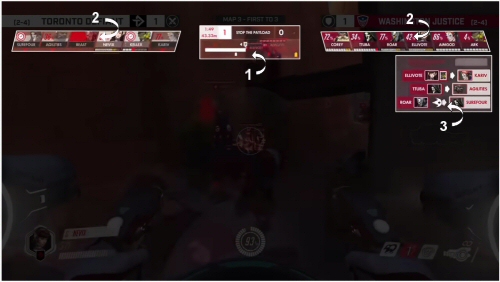 The Objective Tracker is located in the top center of the screen. It shows the time remaining, current scores, and each team’s objective progress. Keep an eye on this and you’ll know who’s running the game, and who’s falling behind. Note that, if both teams are actively pursuing the objective when time runs out, the round can go into Overtime, which will be displayed on the tracker.

You’ll find this info in the top-left and top-right segments of the screen, with Team A shown on the left, Team B on the right. Each team’s heroes are lined up from left to right – Damagers, Tanks, Supports. The frame shows which hero character each team member is using, progress towards achieving their Ultimate (a.k.a. “Ult Economy”), and their current status (hacked, stunned, asleep). An eliminated player’s frame will turn grey until respawned.

When the game reaches an intense stage of fighting, the Kill Feed is the frame to keep your eyes on. It is located on the right side of the screen, beneath Team B’s Unit Frame. The Kill Feed displays every elimination as it happens, displaying the hero that was killed, the enemy hero that was responsible for it, and how the elimination occurred. White arrow represents a basic attack; yellow arrow signifies head shot; a white rabbit next to the arrow states that an ability was used. A team’s destruction of any important objects will also appear here.

There are almost as many ways to win (or lose) a game of Overwatch as there are heroes to do it with. There are 20 different heroes, all with unique skillsets and ‘Ultimate’ abilities that cater to the Offense, Defense, Tank or Support roles. Unlike other MMOFPS titles, players can switch heroes on the fly. Teams that know how to utilize this unique feature to the fullest can easily gain and sustain the upper hand over less efficient opponents.

There are four different types of matches teams can participate in. The objective and winning conditions for each vary by the task at hand.

In an Assault match, the teams are assigned to Offense or Defense. Offense is the attacking team. Their task is to take and maintain control of two specific points on the map within a given time limit. The Defense team will hold both positions to start, and is tasked with preventing the attackers from gaining control of both points before time expires.

Teams will take turns as Offense and Defense to determine a winner. If the objective is not met, the team with the most progress towards the objective determines the winner. If neither team achieves at least 33% progress, it ends in a tie.

A Control match is similar to Assault except that there is only one point to capture, and neither team is designated offense or defense. Both teams are working to capture the point. Every second that a point is held uncontested by a team is worth score points. When time expires, the team with the highest score wins.

These matches give the escorting team a payload to move securely from one end of the map to another, with a series of checkpoints in between. Each checkpoint reached grants additional time towards reaching the goal. The other team must stop the escorting team from moving the payload. The game ends when time runs out, or the payload reaches its destination. Each team will get a chance to progress the payload. The one who escorts the furthest wins.

Hybrid matches are a combination of Assault and Escort. The attacking team will first capture a point on the map. Then, they must escort the payload to its destination. The enemy team will try to stop them from capturing the point and/or escorting the payload. Both teams have a chance to attack and defend. The team with the most progress wins.

What OWL Teams are Worth Betting On?

The topic of which pro teams are worthy of Overwatch League betting is an intensely debatable topic, and one that easily deserves its own separate discussion. For this I direct you to our…