Gearing Up for iGB Live! eSports Streamers Tournament in Amsterdam. 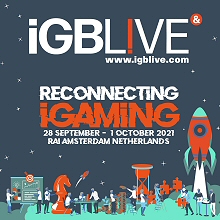 All eSporting eyes are on the Netherlands this month as Clarion Gaming finalizes preparations for iGB Live! and iGB Affiliate Amsterdam. Scheduled for September 28 to October 1, the upcoming networking conference and esports tournament at RAI Amsterdam mark the first large-scale, in-person gaming event to take place in 18 long, arduous months.

Organizers are hoping the presentation of iGB Live! will help to educate the world on what they see as a global phenomenon in iGaming. Esports is easily one of the fastest-growing sectors the gaming industry has ever witnessed, currently estimated to be worth $13 billion in annual betting revenues alone. That’s not to mention the value of competitions for the world’s most skillful esports team.

To ensure the safety of all guests – presenters and attendees alike – iGB organizers are asking everyone to take into account the traveling guidelines put in place by the Dutch government. iGB has secured Quarantine Exemptions for all attendees. All foreign visitors will need is a passport, letter of invitation (provided), quarantine declaration form, and either proof of vaccination, or a negative PCR test result dated within 48 hours.

The goal of igamingbusiness.com – the world’s number one iGaming publication by far, and creator of the iGB Live! and iGB Affiliate Amsterdam – has always been to bring the world of internet gamers together, perpetuating awareness, growth, and a healthy respect for the community as a whole. iGB Live! is a direct extension of that goal, connecting the industry’s operators and suppliers, new and old.

This year, the goal is slightly different. After a year and a half, iGB Live! seeks to nurture the B2B side of the business, and at the same time, teach operators how to reconnect with iGaming and esports fans. The world around us may seem a lot different these days, but online gaming has so much to give. IGB Live! intends to show the world that iGaming is far from reaching its peak

According to a statement from organizers, the event offers a little (or a lot of) something for everyone. “iGB Live! doesn’t just connect operators with suppliers (though we do it very well), we create an experience for our community that aims to reduce risk, save money and ensure our attendees leave our show satisfied and with actionable plans for the future.”

New to iGB Live! Amsterdam is a sector in esports entertainment, highlighted by an exclusive tournament for esports streamers. Hosting the tournament’s Twitch stream will be none other than Ryan Hart; a.k.a. Prodigal Son. Representing the United Kingdom, Hart is the most successful professional fighting game player of all time; the 2x Evolution Champion in Tekken Tag Tournament and Tekken 5: Dark Resurrection.

Hart’s live streaming commentary will be amplified by specialized data from a trio of Clarion Gaming partners. They include analytic specialist Escharts, esports data provider Bayes, and iGaming industry payments provider Skinsback. The idea is that viewers who watch the tournament unfold live via Twitch, will also have the opportunity to learn more about the business, data, payments, and esports betting, directly from the most famous streamers and influencers in the industry.

The live esports tournament – appropriately titled The iGB Hart Cup – will be held on September 29 and 30. Honoring the host’s expert fighting game abilities, it will feature Street Fighter V as the primary competition, with a £4k prize pool to be shared between the top 8 finishers.

An Event for the Modern Ages

William Harding, Head of Esports at Clarion Gaming and curator of iGB Live!, believes the inclusion of competitive video gaming is a natural and necessary step in the progression of the iGaming industry, as a whole. He explains that the activation of esports at iGB will “help demystify a sector whose global viewership is predicted to surge from its current level of 495 million people to 646 million by 2023.”

Harding goes on to detail his enthusiasm over securing Ryan Hart as the host of the inaugural iGB Hart Cup. Not only is he the most qualified eSports competitor for the job, but he’s also just earned an esteemed notation in the Guinness Book of World Records.

Ryan Hart is now the proud owner of the record for most consecutive opponents in Street Fighter 5 (SFV). Hart took on a staggering 260 opponents in 11 hours of gameplay.

Under the valuable direction of Hart, Harding says, “the iGB audience will be able to listen to the commentary and watch the game unfold.” In addition to the sheer entertainment value therein, Harding adds that esports fans will also be encouraged to partake in a form of risk-free betting by using Twitch channel points to make match predictions.

The Affiliate Side of the Esports Business

No iGaming exhibition would be complete without catering to its most lucrative marketing team, the affiliates. They are the primary advertisers of the iGaming industry. Affiliates work diligently to drive new players in all genres of iGaming; online casino, poker, bingo, sports betting, and of course, esports betting.

Naomi Barton is the Portfolio Director in charge of scheduling for iGB Live! and iGB Affiliate Amsterdam. Barton isn’t just excited to see the industry bring back the in-person experience. She’s also particularly thrilled about this year’s inclusion of esports; not to mention the introduction of the all-new iGB Hart Cup eSports Streamers Tournament.

“Practical insight delivered by experts and made digestible with plenty of opportunities to network – it’s what the in-person experience is all about,” says Barton.

“The iGB Live! esports Streamers feature encapsulates the value of the return of in-person events. Being able to bring the industry together face-to-face makes it so much easier to be able to explain this huge and growing global market, demonstrating how the industry can reach out and engage with esports fans, the commercial weight of esports streamers when used as betting affiliates, and exactly how and which components of the esports ecosystem are relevant to the betting market.”