US and Canadian tournament schedule for Skat players. 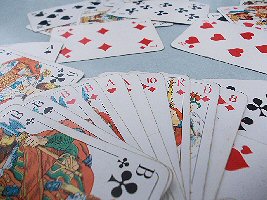 Each year, American and Canadian Skat leagues make their way across the continent to compete in a series of major tournaments, including the 5th US Open Championship that wrapped up in Florida last month. Congratulations to Texas native and ISPA USA Vice President Jim Leissner for his big win there, and to this year’s US Ladies Champion, Kristina Huisman of Edmonton, Alberta.

The game of Skat is popular all across North America – primarily in areas of great German influence. It is, after all, the official card game of Germany, and has been for well over a century. There are untold thousands who enjoy the game socially, and at least 700 who are part of Skat clubs in Canada and the United States.

This isn’t your ordinary trump-bidding, trick-catching card game. The rules of Skat are more complex, employing a scoring system that can result in the most skilled players leaving amateur opponents in a thick cloud of dust. Suffice to say, Skat tournaments aren’t something to be entered into lightly. If you don’t have enough experience with the game, having developed an effective Skat strategy, your odds of placing anywhere respectable in a tournament are next to none.

If you have the know-how and experience behind you to compete amongst the best Skat players in North America, by all means, continue reading. You’ll find the complete 2019 tournament schedule for Skat below. If, however, you feel you need a little more practice – if not a complete tutorial on the game – please refer top the links below before registering for an event.

Although not a requirement, I would encourage anyone who plans to enter a Skat tournament to join a local club, if available. You’ll find a complete list of all Canadian Skat Clubs here, as well as USA Skat Clubs here.