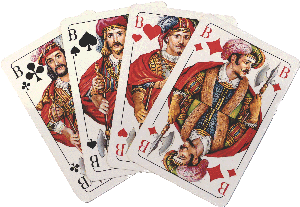 Skat, like so many card games of our day, originated far across the ocean in Europe centuries ago. In that regard, it’s actually one of the younger card games to spread across the globe. Skat just recently celebrated its 200th birthday (although the exact date is unknown).

The game came across the ocean to North America and eventually Canada by way of migration. It is played heavily in German-speaking communities throughout Europe and the Americas. It should not, however, be confused with the game of 31, also known by the name Scat (pronounced the same, but spelled different), popularized throughout the United States around the 1970-80s.

This card game dates back to the early 19th century, somewhere between 1810 and 1817. It was invented by a local card gaming club in what was then Altenburg, Germany (now Thuringia, Germany) known as the Brommesche Tarock Gesellschaft. The group’s name comes from the same three-player game that Skat was derived from, Tarock, which was combined with a popular four-player game of the time, Schafkopf, to bring us the original game of Skat.

The name Skat is actually taken from Tarock; a term that refers to discarding in that game. The word Skat is derived from the Latin term scartare, which literally means to discard.

Several card game rule books have described the game of Skat over the centuries. The first known rules were published in 1848 by Professor J. F. L. Hempel, a secondary school teacher and member of the aforementioned Tarock club. By his account, the game was played by more simple rules in those days.

Originally, the first player (left of dealer) was dealt 12 cards. The other two received only 10 cards. The 12-card player would then discard two cards before declaring a contract and proceeding with the game.

From one region to the next, the game was played somewhat differently. It wasn’t until 1886 that a special society of Skat players decided to order and document an official set of rules for Skat. Those rules were published by Theodor Thomas of Leipzig in 1888. This version brought about the ‘Skat‘, two cards are dealt face down, and incorporated bidding for contracts.

Note: Try as I might, I could not find the names of either book by Hempel or Thomas. Google Translate was of no help… Perhaps if my German were better? Please leave me a comment if you can shed additional light on this…

The official Skat rules by which the German Skat Federation and International Skat Players Association (ISPA) play by now have been in use since January 1, 1999. There are still many Skat variations in existence as well; many of which can be found in today’s top Skat apps for mobile.

The ISPA is an organization with members all over the world. ISPA Canada was formed in 1981 by four German-Canadians, Harald Lang, Gottfried Ruge, Klaus Patommel and Günter Baur. They helped to build the game of Skat into the popular card gaming venue that it is in today.

The ISPA Canada hosts 13 clubs spanning the country from Vancouver, BC to Montreal Quebec. As of 2016, the Canadian branch boasted more than 330 members; a number that continues to grow with each passing year.

In 2006, 2008, and again in 2016, Team Canada won the National Team World Championship. We’ve gained so much notoriety of late, our great nation has been chosen to host the 2020 Skat World Championship, slated for October 6-14, 2020 in Edmonton, Alberta. You can check out the current list of ISPA Canada Skat Tournaments for more information on upcoming events.