Popular variations of Skat played in Canada and elsewhere. 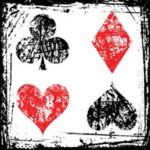 The rules of Skat are complicated enough without convolution. If you’ve just recently learn to play the game, I wouldn’t recommend throwing additional rules into the procedure. But for those who’ve been playing for years, it can be fun to mix things up a bit.

There are quite a few common variations to the official rules of this popular card game. ISPA Canada certainly doesn’t encourage them, but they can be quite popular in societal groups. And, being a centuries old card game of German descent, most of the variant names are German as well. They include things like Kontra, Ramsch, Spitze, and Schenken.

The following adaptations utilize the standard rules of the game. They provide players with one or more additional declaration options, both for the bidder and defenders.

Kontra is a declaration that can only be made by the defenders after the declarer has led to the first trick. Some play where Kontra must be announced prior to the contractor’s initial lead, in which case the declarer must give everyone enough time to say Kontra.

Announcing Kontra will double (2x) the value of the score (not the amount bid, but the actual value of the score) at the end of the hand. If Kontra is announced, the contractor will have the option to announce Rekontra, doubling the score value again to 4x.

Most groups who play by the Kontra rule won’t allow a defender to Kontra if they had an opportunity to bid 18, but passed. This prevents players with a good hand from passing the bid just to call Kontra on another.

This is another popular variation of Skat wherein players are encouraged to bid (rather than keeping quiet with good hands to set others). Normally, if all players pass, the cards are thrown in and a new hand dealt. In Ramsch, if no one bids, everyone is forced to play a Ramsch hand instead. It’s a lowball version of the game wherein players try not to catch anything. Since everyone had such a bad hand, this should be easy right? Think again!

Each player will keep their own tricks, and the player who catches the most points loses. There are a few different ways to play this, so make sure you agree on the rules with your group before getting started:

The loser will deduct from their score the amount of points they captured. Everyone else adds their points to their score. In case of a tie, both players lose. If someone catches no tricks (not just no points, but no tricks at all), they are deemed a Jungfrau (virgin), and the loser scores double points.

This version is so popular that some people don’t even play Skat – they just play Ramsch!

This is a special announcement that can be made by the contractor before leading to the first trick. When calling Spitze, the declarer must win the final trick with the lowest trump; that being the 7 of trump, or the Jack of diamonds in a Grand contract.

Once announced, the declarer must collect 61 or more points and win the final trick with the low trump. If successful, one multiplier is added to their score. This multiplier is not added if the score is not already 61+, in which case the player loses.

Schenken is an announcement that the defenders can make collectively before the first trick is led. It is essentially a forfeit, wherein all defenders agree they cannot set (beat) the contractor. To do this, one defender will say “Schenken”. The other defender will then either agree or disagree. If he disagrees, the game carries on as usual. If he agrees, the contractor must decide to accept or decline the Schenken.

It is also possible for defenders to Schenken twice. If the declarer does not accept the first time, and the defenders Schenken again, the declarer can either accept, taking the score for a Schneider (90+), or decline again and play the hand as if it were an Announced Schwarz (must catch all tricks).

There are many more Skat variations played all over the world. Those listed above are the most popular forms in which the rules of the game do not change – only the declarations that can be made at the start. Use the following link to learn even more ways to play Skat. If you just can’t get enough of this popular Canadian card game, check out our newest section of the top mobile Skat apps reviewed.