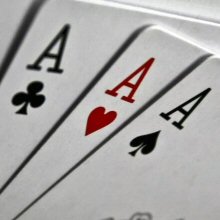 Scat, or 31 as it’s known in many parts of North America, is played by a lot of variant rules; slight deviations from the standard rules of play detailed here:

As with so many popular card games, rule variations evolve from mistaken teachings throughout the generations, needful player adaptations, or the simple desire to make things more interesting.

The following is a list of all known, basic variations to the rules of Scat. There are more in-depth variants that we cover on a different page, mostly because, while the games themselves are clearly in the pool of 31, the alterations are so influential, they have earned completely different titles. Use the following links to learn more, and how to play for free on your Android or iOS device.

Also you’ll find the following 31 strategies work well with all of these variants:

In many parts of North America especially, a 3 of a Kind is an exceptional hand. A 3 of a kind is, of course, three cards of the same rank, such as three 3s, three Jacks, or three Aces. Most groups who utilize this hand ranking will count it as 30.5 points. In this way, it beats every other hand except a Scat (31). In the case of a tie, the higher ranking 3 of a kind wins (Aces being highest, 2s lowest).

Three of a Kind is Best Hand

In rare cases, a 3 of a kind can be the best possible hand. My grandfather taught me the game by this rule, where 3 of a Kind is the best hand; 31 second-best. We also did not declare “Scat” with 31. You had to knock to end the game, no matter your hand.

I did not realize that this way of playing wasn’t standard until after he had passed away, thus I never got the chance to ask him where he learned it. He and his parents grew up in the southern United States, and I’ve only found others who play this way residing in Texas.

From personal experience, I can tell you knocking with 31 and losing to 3 of a Kind is rough!

Knocking with a minimum point value is still optional. If you really want to mix things up, make it mandatory!

This is a very unique rule that allows the first player (left of the dealer) at his/her discretion to call a “throw down” at the very start of a hand. The player cannot look at his/her cards first. If a “throw down” is called, all players must instantly turn their cards face up and count the value. No one is permitted to draw.

If the player who called “throw down” has the lowest score, he/she loses two coins instead of one (just like the player who knocks by traditional rules).

Cribbage.ca describes a French Canadian version of 31 with some rather odd rules. I’ve saved this for last as I’ve never come across anyone who plays this way. In this variant, winning a hand awards 1 point (no coins are used). The target score is 31, making for a game that could easily last many hours.