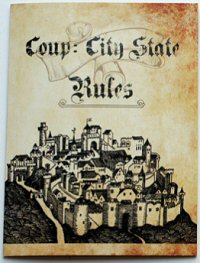 Most of the games we cover have a deep and rich history; some so old their exact origins are undecipherable beyond theorizing. You’ll be glad to know that Coup is not one of them. This game isn’t very old at all, although its immense popularity has already spurred an abundance of sequels.

The only question that’s hard to answer is whether it should be categorized as a card game, or a board game? It’s played with cards. There is no actual board. And yet most notations describe it as the “Coup board game”. The only additional game pieces are coins, cut from cardboard, and the instruction cards that help each players keep up with their influential identities.

So which is it? I say it’s a card game. But who cares what I think? Let’s get on with what you came here for, a literary depiction of Coup history as we know it…

The original Coup game was a multi-year development project undertaken by Rikki Tahti and his entire family in the early 2000s. The Tahtis are the founding members of La Mame Games—the company from which Coup was originally manufactured in 2012.

The Tahti family spent several summers working on the game before they felt it was ready for marketing. They chose to theme it around an Italian medieval city state, with the game’s original artwork designed by Rikki’s brother, a professional illustrator.

In an interview with Beth Heile of BoardGameGeek, the game’s inventor explained how, and why, his family created the game of Coup.

“We as a family love playing games, but after a lot of worker placement games, we felt we wanted something that’s a little bit more aggressive, a little more interactive, and that was short—and with a bit of bluffing!”

Mr. Tahti and the La Mame Games crew were debuting Coup at Spiel 2012 (aka Essen Games Fair) in Germany that day. “The game is essentially a kill or be killed game,” explained Tahti, where deception, bluffing, and blatant assassination meld into the game’s singular objective: “kill off the other players.”

While its description was incredibly intriguing, Coup garnered only a small following upon launch. The problem was that it lacked two main ingredients every successful card / board game should have—eye-catching graphics and a stellar marketing campaign.

Reinventing Coup for a Mass Market

A few months later, along came the perfect remedy by way of another games manufacturer, Indie Boards and Cards (IBC). Collaborating with Tahti and La Mame Games, IBC gave Coup a complete overhaul. The original rules were kept intact, but the cards received a dramatic face lift, and this new game became the backstory for an earlier creation of IBC known as The Resistance (which truly was a board game, btw!) Thus Coup: The Resistance was also born.

The image below shows the original packaging and artwork of Coup, compared to the slightly more recent, and much more successful, IBC edition.

Since then, the fandom surrounding Coup and The Resistance/Dystopian Universe has exploded. There are now multiple editions and expansion for the game; some imbued with various thematic power schemes, including (but not necessarily limited to):

Now that you know the history of Coup, why not learn more about this popular Canadian card game (er, board game?) Browse the links below for more information.