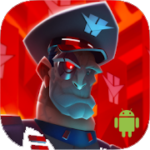 It’s rather fascinating how quickly the game of Coup has grown in popularity. We can attribute its success, in part, to being such a fascinating game in the first place. After all, who doesn’t at least day-dream of world domination? However, it’s also attributable to an excellent marketing campaign. One that now includes distribution of Coup for Android.

You can find it on the Google Play Store with a simple search in the Apps department for “Coup”. It the first search result in the apps list, marked by the creator’s custom design of a darkly intimidating, yet protectively stoic ‘Captain‘.

The Coup game for Android mobile users was developed by the expert programmers and visual artists at Fox City Games LLC, likely in collaboration with the original creators of Coup. This assumption is based upon the precise depiction of trademark Coup playing cards and characters (and the fact that Fox City Games has not been sued for their usage).

Before we go any further in our Coup app review, here’s the specs from Google Play:

In many ways, the Coup mobile adaptation mimics the original board game perfectly. It features the same main character cards—Duke, Assassin, Contessa, Captain and Ambassador—each possessing their standard skills. Players can bluff, steal from, and manipulate their opponents in their mission towards total domination.

The game comes with multiple deck options and expansion packs (for a fee), including Coup: Resistance, other classic editions, and specialty packs with custom character art. You don’t need to spend any money to play, but it can enhance the experience, and paying to remove ads can fix lag issues on slower Android smartphones and tablets.

Users can compete in 2-4 player multi-player games with others from around the world, exclusively among friends, or in single-player mode against AI computer players of variable difficulty. In multi-player games, player ranks are designated to maintain a fair field of play. Rank increases as players win games, earn badges and complete achievements. A built-in chat system allows players to communicate, or taunt one another, in real time.

Coup by Fox City Games also provides a complete tutorial and strategy guide for new and intermediate players to learn the game and sharpen their skills. Alternatively, you can check out our guides:

I’ve been playing the Coup card game for years, and it’s one of my absolute favorites. With that said, the mobile adaptation by Fox City is an admiral attempt at digitization. It’s got a lot of the same features as the game, and provides hours of enjoyment for its biggest fans.

But in this case, ‘hours of enjoyment’ isn’t always a good thing. By far the largest complaint from myself and other users is the caustically excessive time bank. Each player is given 2 minutes to act, per turn, and it can create for some extremely long and boring games among inexperienced players.

Another gripe I have is the lack of an Inquisitor Edition. It’s an extremely popular version, and one reason so many people prefer playing Coup with a standard deck of cards. The functionality of characters can be adjusted to suit the edition of choice. There’s also no option to take Foreign Aid, hindering a player’s ability to mount a coup, and limiting the Duke’s influence.

Otherwise, it’s a very entertaining game. It provides newbies with a great way to practice their skills, or see if they want to buy the real card game. At the same time, die-hard coup fans can play any time, anywhere, with friends or other real players from all over the world.

Not an Android smartphone or tablet user? Check out our review of…