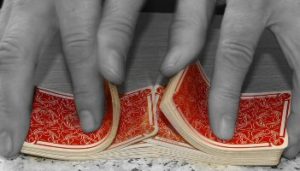 Unlike most of today’s most popular Canadian card games, Sergeant Major, or 9-5-2 as we call it, doesn’t have a specific history. The only thing that is truly known about the game – or at least very widely believed – is that it originated with the British military. There’s not even a time frame present as to when it came into existence.

Specifically, the story is that Sergeant Major was the most popular card game among the British Royal Air Force. This would certainly explain its formal name. As it began spreading throughout other parts of the world, trick-catching and scoring variations were applied. Thus its more modern name of 8-5-3 (or 3-5-8) in Europe, and 9-5-2 in Canada, came about.

Theorizing the History of 9-5-2

The British Royal Air Force was founded in 1918. If that is truly where the game of Sergeant Major originated, then we can confirm that it’s no more than 100 years old. However, like pretty much every other card game known to man, it can surely be traced back to its ancestral roots.

To properly theorize 9-5-2 history, we have to consider all major elements of the game. Most importantly, it’s a trick-catching card game, using a full deck, meant for three players, with a trump suit that not bid upon.

The oldest trick-catching games date back to the earliest days of the second millennia, originating from China. Hierarchy of numbers and suits were utilized in those times. However, they did not involve any sort of “trump”. So we can eliminate Chinese descent.

The first game to invoke “trump” suits was an Italian game called “Trionfi”. But that version used a separate set of cards that had no suit. They were, in fact, Tarot cards, which were added to traditional decks to produce trumps. So that’s not it either.

The oldest likely ancestor of 9-5-2 is “Triomphe”, a French card game, and the first known to utilize suits as trump cards. This game has been traced as far back as 1480 France. By the oldest known rules (1659), the game was played with four players, pairing up into partners. And even though a standard 52-card deck was used, each player only received 5 cards, with the goal of catching 3+ tricks.

It is likely that Sergeant Major was derived from a mixture of this and other influential trick-catching games of the 15th-19th centuries. It’s similar to “Reversis”, another French card game dating back to 1601, although that game is much the opposite. In Reversis, players strive not to catch any tricks.

It’s also analogous with “Ombre”, a late 16th century Spanish card game. This game was originally devised for three players, using a relatively full (40-card) deck. However, it requires players to bid on trump, rather than giving the dealer the lead roll of trump-caller with each hand.

No doubt, the game’s (seemingly) primarily French origins had a lot to do with its quick spread to, and popularization within, Canada over the last century. 9-5-2 among the most favored card games in the country, alongside Euchre and Cribbage.

While the game doesn’t allow for bidding on trump, many players are very proud, and willing to bid upon, their skillful talents for the game. It is not uncommon for Canadians to compete in single games or tournaments for money. Since the advent of the internet, real money 9-5-2 games are even available online. Players can compete against others from all over the world, betting anywhere from micro-stakes to hundreds of dollars.

If you’d like to learn more about the game, be sure to check out our other Canadian Sergeant Major pages, including 9-5-2 Rules, 9-5-2 Strategy, common Variations of 9-5-2 and some important cautionary statements about Betting on 9-5-2.