Sergeant Major, or 9-5-2 as it’s commonly known in Canada, is a trick-catching card game that’s especially popular in many parts of the Great White North. The game’s formal title comes from its immense popularity among the British Royal Air Force. However, their version goes by 8-5-3 rules. Today, we’ll discuss how to play 9-5-2 in Canada. 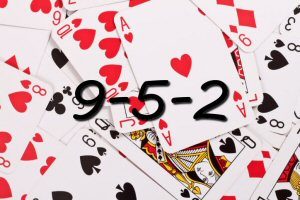 This game is meant for exactly 3 players (no partnerships). It uses a full deck of 52 cards (no joker). An initial dealer is chosen at random, who will shuffle the deck. Cutting, by the player right of the dealer, is optional.

When ready, the dealer will deal out 16 cards, one at a time, to each player. The remaining four cards are set face down to form a kitty.

Each player will then look at their cards. The dealer will choose the trump suit (clubs, diamonds, hearts or spades). After calling trump, he may pick up the 4 cards in the kitty, rearrange his hand as desired, then discard 4 cards back to the kitty.

Note that calling “no trump” is not allowed.

The player left of the dealer will go first by leading a trick (playing a card). In clockwise fashion, all other players must follow suit. If a player does not have any cards of that suit, he/she may play any other suit, including (but not limited to) a trump.

As the Canadian name implies, 9-5-2 rules require particular players to catch at least 9 tricks, 5 tricks and 2 tricks. Like so…

If any player fails to meet their target score, they are said to be Down by the number of tricks they missed. A player who catches more than the target is Up by the number of extra tricks captured. This is important in scoring, and in all proceeding hands of play, when an exchange of cards takes place.

After the initial deal, things get a bit sticky. The next player (clockwise) will be the dealer, passing out 16 cards to each player, just as before. This time, however, once players look at their cards, the players who were Up in the previous round will pass the number of cards they were up by to the players who were Down.

The dealer will then call trump, pick up the kitty, rearrange their hand as desired, and discard four cards.

If the dealer was a Down player, and the kitty contains a same-suit card that is higher than the one they passed back to an Up player, they must secretly reveal the card to that Up player. Afterwards, the dealer keeps the card, and play resumes.

By traditional European rules, the first player to catch 12+ tricks in a single hand is declared the winner. However, Canadian Sergeant Major rules call for a total score count to be kept for each player. The target score to win is agreed upon before starting, usually set at 10 or 20.

Now that you know how to play 9-5-2 in Canada, why not learn more? Check out our additional pages on 9-5-2 History, 9-5-2 Strategy, common Variations of 9-5-2, and some important cautionary statements about Playing 9-5-2 for Money.