Competitive Fortnite betting goes under the microscope in Canada.

Fortnite was released by Epic Games in 2017, and became a virtual overnight success. Of its three game modes, Fortnite: Battle Royale has been the most successful of all, attracting more than 125 million players worldwide in its first year – now up to 250+ million – and earning its makers hundreds of millions of dollars a month.

The game takes place in a fictional world of 3D animation. Similar to Overwatch, the graphics are not life-like, but cartoonish in nature. Having gained official status as a “cultural phenomenon”, Epic Games wasted no time in organizing Fortnite: Battle Royale eSports competitions, such as the inaugural Fortnite World Cup that took place in July 2019, guaranteeing a prize pool of $30 million.

Competitive Fortnite games are played exclusively in Battle Royale mode. There are various types of matches – namely solo, duo and squad – which can impact the types of bets available. Either way, though, the goal of the player(s) is to survive all other players or teams. Although the players may not be competing for any other specific goals, the bettors can bet on more than who will win a game, match, or tournament.

In contrast to most eSports genres, the betting odds are much greater in Fortnite, because a player/team isn’t just competing against one other player/team. Battle Royale pits 100 players against each other in every match, whether it be 100 solo players, 50 teams of 2, or 25 teams of 4. 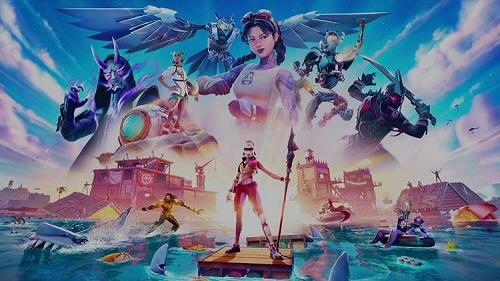 Another factor that makes betting on Fortnite more difficult than other eSports is the random nature of the game. Players do not choose their weapons or equipment. They can choose when to jump from the ‘Battle Bus’, and where to land on the map, but an RNG algorithm determines the random placement of all items and weapons. A superior player who can’t find a strong weapon can lose to a player of far less rank who gets lucky enough to find a legendary shotgun in their first chest.

That being said, the most common types of Fortnite bets include:

A bet on an individual player to be the sole survivor against 100 others in a single match.

A bet on a team of 2 players to be the final survivors against 50 other 2-man teams. Both players on the team do not have to survive. So long as one team member survives to get the final kill, the whole team wins.

A bet on the player or team to get the first kill of the match.

A bet on a single player that they will achieve the highest number of kills in a single match.

A bet on the player or team that will win a tournament.

For more details on exactly how to conduct Fortnite eSports betting, please refer to our previous segment:

The number of competitive Fortnite events has exploded in the last two years. Tier 3 and smaller series occur practically on a daily basis, covering every region of the world. Tier 2 (Minors) and Tier 1 (Majors) championship series are expanding as well.

The first Fortnite World Cup came with a $30 million prize pool; $15 million for solos, and $15 million for duos. Other majors include the Fortnite Championship Series (FNCS), with a title for each region, the FNCS Invitational, also held regionally, and the PC Winter Royale. Tournaments are still being bred and weened via critics demand.

Fortnite Game Play at its Core

The premise of Fortnite: Battle Royale is perfect for the competitive eSports market, to an extent. It allows for 1 (solo), 2 (duo) or 4 (squad) players to compete in an arena of up to 100 players. Everyone starts on even playing ground, dropping into the arena with no weapons. Players can traverse the map, hiding out, seeking combat, and/or scavenging for equipment and resources to aid in their survival. Weapons can be enhanced at an upgrader, provided the player has harvested the required resources. The last player, duo or squad standing wins the match.

A wide range of characters, emotes, dances and gear wraps (graphics) make each player’s experience highly customizable. However, Fortnite offers no way to gain an advantage over an opponent outside of gathering weapons, items, and resources. The placement of all weapons and items is entirely random, changing with each new match.

A game begins with each player having 30 seconds to jump from the ‘Battle Bus’ as it flies over the map. Each player/team can then sky-dive to whatever location they want, collecting items, resources and weapons as a poisonous mist slowly moves inward, encompassing all but the safety circle of the map.

Players are forced to move inward as the game progresses to stay within the safety of the circle, or face the slow, impending death of the poisonous mist. This circle can also provide random advantages. Lucky are the players who choose a landing point that happens to be near the circle. A player who chooses a strategic landing point that ends up being far from the circle would need to spend a lot more time traveling than gathering an upgrading equipment. Thus the lucky lander can end up with a distinct advantage when it comes to the final showdown, regardless of actual skill ratings. Epic Games did its best to eliminate such advantages by installing multiple modes of quick travel, including helicopters, vehicles, and boats, in the latest release.

Once the circle shrinks small enough, it is inevitable that players – even the campers and lurkers – must emerge to face one another in a final showdown. The sole survivor, or sole surviving team, is crowned the victor.

How and Where to Watch Fortnite eSports

YouTube and Twitch are the primary services for live streaming webcasts of Fortnite eSports competitions. Alternatively, you should be able to watch any event you’re betting directly through the eSportsbook that hosted the bet.

The most popular Fortnite eSports live stream channels are: