Nevada woman learns how to win a progressive jackpot outside Vegas. 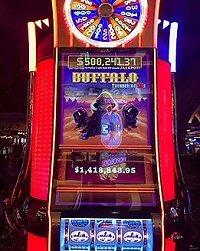 Las Vegas, Nevada has one of the highest slot machine volumes of any city in the world. Anyone with a genuine desire to win a multi-million jackpot might assume that Sin City is the best place to do it. This is one of those situations where quality over quantity comes into play, and there’s few higher quality games than the Buffalo slot machine.

One local Nevada woman learned that lesson the easy way over the weekend. She was playing the famous Buffalo progressive slot by Aristocrat at an off-Strip casino in Henderson, Nevada when all her dreams came true.

It all happened over the weekend at a resort casino in the city of Henderson, about 16 miles southeast of Las Vegas. The lucky woman was playing the Buffalo slot at the upscale Green Valley Ranch Resort when she spun the reels to the glorious tune of $1,418,848.95.

According to a brief statement by a spokesperson from Station Casinos, owner of the off-Strip casino property, the winner is electing to remain anonymous. And who can blame her? If I were suddenly a millionaire, I can think of a few people I wouldn’t want to come knocking.

How to Win a Progressive Jackpot

Winning a big jackpot has more to do with what and where you play, rather than the volume of games. The number of slot machines available won’t increase your odds of winning. There are tens of thousands of slot machines piled into Strip casinos, and sure, jackpots do hit there. But statistically, slot for slot, they hit more frequently off the Strip than on.

Despite the close proximity to Las Vegas, Green Valley is a far cry from the typical ambiance of the Strip. There are no blinding lights or gaudy signs persuading travelers to enter their doors. The opulent resort, inspired by Mediterranean architecture, caters to all who desire a luxuriant spa and casino experience, without the ostentatious blitzkrieg of garish bling and colorful crowds.

It’s that ostentatious nature of Las Vegas that attracts so many to the gambling hub, and the very reason why those casinos don’t pay out nearly so well as their nearby competitors. In late January, the Nevada Gaming Control Board released a telling report that revealed Strip casinos have the worst slots payouts.

The report indicates which area slot machines produced the highest “Gaming win” in 2017. Gaming win does not denote a win for the players, but rather profit/revenue for the casinos and state. Strip casinos were reported to have the highest gaming win of 8.04%. That translates to a 91.96% return to player (RTP) on slot machines; the worst win rate for players in the entire state.

Conversely, the Boulder Strip area has the lowest gaming win (best for players) of 5.66%. That area includes Henderson, and Green Valley Ranch, where the Buffalo slot machine jackpot was struck.

So if you want to know how to win a slots jackpot in Nevada, there are some very simple rules. Number one, avoid Las Vegas altogether. Off-Strip casinos are making every effort to give players a better opportunity to win. In fact, with an overall 94.33% slots RTP last year, they’re coming closer to competing with online casinos. Playing on desktop or mobile comes with the best average slots RTP of 96-97%.