Should Daniel Negreanu’s More Hold’em Wisdom for All Players be a part of your library of literary poker strategies? 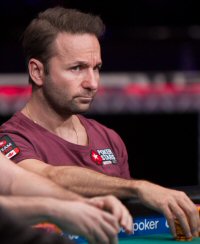 There aren’t many live or online poker players who harvest the respect of Canada’s knight in mirrored armor, Daniel ‘Kid Poker‘ Negreanu. His poker game goes far beyond intrinsic skills and strategies. Daniel’s abilities are comparable to a sixth sense, in which he’s able to deduce the hand strength of any opponent, at virtually any given moment.

For this reason—and the fact that he’s often considered the best modern-day live poker tournament player on the planet—his knowledge is highly sought by the poker world’s less experienced. Through literature, blogs, pod casts and the occasional interview, he’s graced us with illuminating knowledge of the game time and again.

In 2007, he published his first poker book, Hold’em Wisdom for All Players, which I recently reviewed. If you read that already, you’ll remember I highly recommend reading that book for a generalized but mind-altering perception of the game. I also walked you through the value of Negreanu’s second poker book, Power Hold’em Strategy (2008), which goes much deeper into situational tactics, and is especially useful for tournament players. Simply put, it’s a perfect follow-up to Hold’em Wisdom.

Today, we finish up the series with a review of Daniel’s third and, for now, final literary guide, also published in 2008. As the name implies, it’s a sequel to his original text, entitled More Hold’em Wisdom. 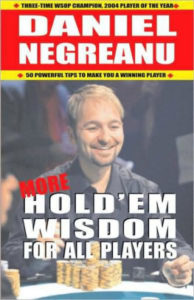 If you’ve read Hold’em Wisdom for All Players, and you’re not among the minuscule fraction of people who hated it, you will want to read this follow-up text. Once again, Kid Poker takes the generalized path, avoiding the meat and potatoes, but offering a great deal of scrumptious little snacks to tide us over.

As I’ve said before, Daniel deserves praise for having enough formal wit to keep his readers entertained. He’s not long-winded, never boring, and articulates well enough to get his point across with ease. I love the fact that every chapter is complete, yet just a few pages long—often as few as 2 or 3 pages.

While pouring over this book’s 176 pages, I was surprised to find him delivering all new content more so than elaborating on his previous works. That’s a positive thing in my book. Or, I mean, in his book. It covers cash games, tournament play, even the transition to sideline games like lowball poker.

The only person I wouldn’t recommend More Hold’em Wisdom for would be a professional player who’s already achieved consistent ROI. You’re not going to find much use in this text if you don’t need to make positive adjustments in your game. Daniel’s book is geared somewhat towards beginners, but most heavily towards intermediate players—and by intermediate, I mean beginners who read the first book, practiced its advise, and subsequently moved up in the ranks.

You won’t experience any grand revelations while scouring Negreanu’s latest book, but you should find yourself nodding along with general reflections that make a lot more sense now that someone has taken enough time to verbalize them.