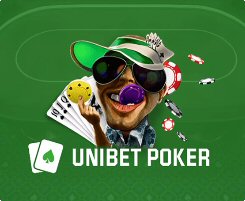 You won’t find any fluff or sales pitches here. We take our poker reviews very seriously, spending countless hours playing on each site, digging deep into the details of categorical proficiencies and shortcomings to deliver a genuine, unbiased scrutiny of only the most distinguished operators in the Canadian market.

Unibet Poker is amid a short list of operators we’ve deemed worthy of our personal game play, and your consideration. It does not possess the largest player base, although it is among the top 10. It exudes the most comprehensive focus on recreational players, going so far as to ban the use of HUDs, making it a perfect spawning point for fish—if you have the patience to seek them out on your own. Unibet offers fantastic software, but a very minimal game variety. You’ll learn about all of this, and much more, in our…

Founded in 1997, Unibet first launched as an over-the-phone betting service in 1998, then an online sportsbook in 1999. The company expanded into other markets over the coming years, including online poker in 2005—the same year Unibet released its first mobile platform. Following a number of key acquisitions, Unibet Group rebranded to Kindred Group in 2016, shifting its focus to a multi-brand operator. That same year Kindred scooped a trio of top honors at the prestigious EGR Operator Awards.

Administering games on a proprietary network, Unibet has successfully attracted an abundance of players from all over the world. Its largest pool is of European nativity. Combined with the acceptance of Canadian players, there’s usually action to be found any time, day or night. Unibet is, at time of writing, the 10th largest online poker network in the world, with a 7-day average of 650 players; 1,200+ at peak hours.

Unibet is a part of the Malta-based Kindred Group, award-winning owner of 13 digital gaming sites including such esteemed brands as 32Red and Stan James. The Unibet Poker website is operated by Trannel International Ltd, also based in Malta.

Licensed and regulated by the Maltese Gaming Authority, as well as the UK Gambling Commission, the operator is held to the highest standards in global iGaming. The UKGC is the strictest of all regulatory bodies in the world. According to their records, Unibet’s UK operations have never once received sanctions, or even warnings, for non-compliance. Suffice to say, social responsibility and player protections are high on the priority list.

While so many online poker platforms feel monotonous, Unibet’s unique and natural design is refreshing. It’s very well laid out and utilizes a sharp color scheme that makes it easier to navigate than most competitor brands. Compatibility covers the full gambit, with a download client for PC and Mac, poker apps for Android and iOS, and an instant-play platform that’s optimized for any browser on all desktops, smartphones and tablets.

Unibet Poker’s RNG-based random shuffling formula is audited monthly and certified by the oldest and most distinguished name in software certification, eCOGRA. There’s no question as to the fairness of the games and unpredictability of each new deal.

As for cash games, there’s a very limited variety of poker variants, and equally limited stakes range. It’s all part of Unibet Poker’s focus on casual players, who prefer the most common rules at lower stakes.

Game variety is limited to:

All cash games utilize a quick-seating template. For example, to play NLHE for $0.02/$0.04, you’ll choose Cash Games>Texas Holdem>NL4. From there, you’ll be instantly seated at an active table with open seats. That’s how all table selection works, so you can forget about predatory “bum hunting”.

Banzai Poker is a spin-off of NLHE exclusive to Unibet Poker. Available in stakes of $0.005/$0.01 up to $0.10/$0.20, these games only allow players to buy-in for, at most, 10x the big blind. Even at the highest stakes, one can only enter the fray with $2 at best. These games are extremely soft, and clearly unappealing to grinders. More often than not, if two or more players get decent hole cards, you’ll see all-in pre-flop situations on the first hand.

The ratio of fish to sharks is higher at Unibet than any other reputable online poker room our team has ever experienced. However, they aren’t the easiest to exploit. Unibet enforces a strict “No HUD” policy. The exclusion of tracking software means you won’t be able to tag a fish for future hunting. Table selection is random, and since Unibet allows players to change their aliases multiple times a day, you won’t be able to table-hop for them, or even happen across them from time to time.

Still, Unibet Poker is a pro fisherman’s delight—if you’re willing to do the work without the assistance of privileged information. You’ll find hordes of fish at the Banzai tables, but the low limits are hardly worth the effort. They’re much easier to extract chips from at NL4 to NL25 games, especially during peak European hours (4pm-midnight GMT / noon-8pm ET), when the schools number in the high hundreds or better.

Not everyone is a fish, though. To make the most of Unibet’s soft players, you’ll need adaptive skills of observation to separate the good players from the bad. The quicker you can do this, the more success you’ll have fishing these waters.

Cash games may not be your best option, though. Unlike most poker sites, the best opportunity to rake in chips from inexperienced players is in the tournament arena. Unibet’s hard-core, pro-casual-player stance deters so many pros that any experienced MTT grinder can make out like a bandit. Hit up the low-buy-in, low GTD events for the easiest catch.

Although Unibet doesn’t offer many big guarantees, and absolutely no high roller events, the sheer volume of tournaments is impressive. No matter the time of day, there’s always something to register for every 20 minutes or less. Most buy-ins are small, in the $0.01 to $11 range, with the highest scaling up to $100. Only satellites to Unibet Open Live events exceed that price point.

The major benefit here for any veteran MTT’er is the smaller fields, which can greatly reduce variance. The guarantees are disappointing, to say the least, most scaling from $50 to $300. You won’t become a millionaire at Unibet, but consistent wins are easy to come by, resulting in an impressive ROI.

The largest tournaments on the schedule (in GMT time) include:

Unibet also hosts daily $25 events with $1,300 GTD, and if you like live tournaments, qualifiers to Unibet Open Live events are held regularly for $1 and up.

Freeroll Tournaments are another constant attraction at Unibet, running round the clock and open to all members. If you have the patience to outlast the all-in frenzy of half the field or better, you can build a decent bankroll from scratch.

Unibet Poker’s welcome bonus package is designed to benefit any type of player, and is more generous than most. All new players receive a three-part bonus that includes $20 free for cash games and tournaments, $200 in incremental-release bonus cash, plus entry to a month’s worth of new player freerolls. The freeroll tickets are awarded upon registration, while the rest of the package becomes available after the first deposit if $10 or more.

New Player Freerolls: You’ll get your hands on four freeroll tickets the moment you successfully sign-up a new player account, no deposit required. These tournaments are held every Sunday, with $500 prize pools each. You’ll have 35 days to use them, so make sure you don’t miss more than one week for max value. Perform well here, and you can actually build a nice bankroll without ever making a single deposit.

Free $20: This bonus is yours instantly upon making a first-time, minimum $10 deposit. It’s split into four segments. First is an $8 cash game buy-in ticket, which can only be used to play NL4 cash games. The rest comes as 3x $4 Unibet Open tournament tickets, used to enter Unibet Open Live event qualifiers.

$200 Play-Through Bonus: You’ll start earning this incremental-release bonus as soon as you take to the real-money cash game tables. It’s released in 5 levels, based on rake contributions, as follows:

New members have 60 days to release all—or as much as possible—of the bonus before any remaining bonus experiences. All told, you’ll need $800 in rake contribution to clear the full $200 bonus, equivalent to 25% rakeback.

Another part of Unibet’s recreational player push, members earn rewards not by climbing VIP tiers, but by completing “Missions”. Every completed mission is worth points, and when players earn enough points, they can be exchanged for cash rewards. Because each mission varies in difficulty, it’s practically impossible to delineate the precise rakeback value.

One of the simplest tasks is creating a new identity. Players can create and maintain up to 5 identities at a time, selecting their individual avatar and alias, and can replace them with new identities at will. There is always one Major and one Minor task to complete. On the easy side are things like seeing 50 flops, being dealt suited cards, and competing in SNGs. Major tasks take longer to accomplish, like reaching a flop where the first and third cards are of equal rank; not just once, but 35 times.

The software is highly accommodating in this area. All missions are shown as clickable icons at the top of the screen. You can click any icon to see your progress, and a detailed description of how to achieve it. You’ll need at least 50 points to start exchanging for rewards, like free cash, bonuses, tournament tickets and customer avatars.

Unibet’s banking methods are a bit on the low side. You’ll find the usual credit/debit cards, a few eWallets and bank transfers. On the plus side, it offers one of the fastest overall withdraw times, especially for eWallet users. The pending period before a payment is processed is 12-24 hours, as opposed to the usual 2-3 days, and the same time frame applies to processing of eWallet cashouts. That gives players access to their winnings in as little as 24 hours.

All available banking methods, categorized by deposit and withdraw, are depicted below. Note that not all methods may be available in your location. The actual list of eligible payment methods may vary once logged into your account.

Unibet provides an extensive, searchable FAQ data base that’s extremely handy in answering most questions without the need of a support rep. There’s also an active Community Forum where questions can be posed, and often answered within 2-60 minutes. If you still need help, or have a more sensitive question, Unibet’s Live Chat reps are available 24/7. Email support generally responds in 2-12 hours. Telephone support is, unfortunately, no longer available.

Unibet may not have a trophy case full of awards for customer support like its rivals at Betsson Poker, but we’ve found no reason to complain. In our experience, the representatives are very friendly, knowledgeable, and eager to resolve any issue that may arise.

As usual, we’re concluding our Unibet Canada poker review with a list of impressive awards the company has earned over the years. You’ll notice the operator received a lot of kudos following an extensive software renovation and transition to casual-friendly gaming in 2015.