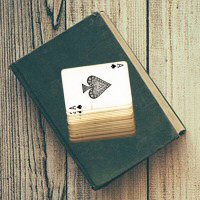 Literature is a popular, exciting and mentally challenging card game that’s played right here in Canada, and many other parts of the world. Although the precise history of Literature is not clear, there are several known facts, as well as some educated guesses that can be theorized based on those facts.

Theoretical and Known History of Literature the Card Game

Literature is played in various countries all over the world, and has been for no less than 70 years, based on multi-generational reports of game play. It’s believed to have originated in India. Based on existing evidence, the most dense population of players who enjoy the game seem to be located in the southern Indian states of Kerala and Tamil Nadu. Additionally, several sources have confirmed learning the game from people who lived in or visited southern India.

In dating the game, and its likely origins, we refer to the testimony of two brothers, Ali and Umar Salahuddin. Their father (whose name is unknown to me) taught them how to play Literature at a young age. He had spent ten years (1930-40) in Kerala, India before attending Columbia University (where he played regularly) in New York City, New York.

It is assumed (although not confirmed) that their father learned to play Literature during his decade in Kerala. Then, while Ali Salahuddin, a masters in math, was striving to earn his MBA from the University of Toronto (1993-95), he shared the rules of Literature with fellow student Brett Stevens; a prime contributor to the information available on John McLeod’s famous card gaming website, Pagat.com.

Literature is one of many names this popular card game goes by. Here in Canada, it’s often known as Canadian Fish, based primarily on the fact that it’s a more complex version of the classic children’s card game, Go Fish. Other alternate names include Russian Fish, or simply Fish. Literature is also closely related to the point-capturing card games known as Authors, Happy Families, and Quartet.

As for why it’s most commonly known as Literature, no one knows for sure, but there are a few theories circulating. Some believe it is a direct descendant of Authors; a similar game that uses a special deck of cards wherein players make sets by matching literary authors with their published works.

Another theory is that the name Literature comes from the simple fact that teams are striving to collect “books”; the standard term that refers to each group of half-suits to be claimed. Then again, the term “books” may also have been derived from the original game of Authors, which would reasonably link the two games, both in name and ancestry.

If the above theory is true, we can presumably trace Literature back to Massachusetts in the mid 19th century. The first Game of Authors was invented by Anne Abbot, and published by G. M. Whipple & A. A. Smith in 1861.

That game consists of 44 cards, comprised of 11 sets of authors and three of each of their most famous writings (11 sets of 4). The object was to ask for cards from other players to collect sets, matching each author with their works.

The unknown factor in this theoretical history of Literature is which game came first, and whether or not one was truly derived from the other, or their similarities are simply coincidence.

What we do know for certain is that Literature—or Canadian Fish—is extremely popular among social pockets in Canada and beyond. Unfortunately, over the last many years, I have never found it available for play online. That is something I hope to see change in the near future.

If you want to learn more about this fascinating card game, the following pages offer rules, variants and effective winning strategies for Literature.