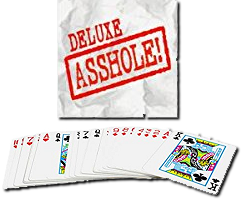 Asshole is a card game of great popularity in Canada and many other regions of the world. It goes by a wide range of names, generally depending on where it’s played. In the US, it’s called President, since the rank of winning and losing players scales from highest recognition (President, Vice President…) to lowest (Asshole). Here in Canada and much of Europe, the ranks generally go from either King or Governor General, to Prime Minister, Citizens, and finally Asshole.

Being so popular among today’s younger generation, the losing player (and therefore name of the game) is sometimes referred to as something a bit less inappropriate; Beggar, Bum, Scum or Scumbag are common. Some Canadian players still call it by its original French name, Trouduc, or Trou du Cul (both meaning Asshole). In adult-age crowds, it’s especially popular as a drinking game.

How to Play Asshole, Rules and Game Play

Asshole is a game for 5 or more players. There’s really no limit, although you may want to include a second 52-card deck for higher numbers. Asshole falls into a genre of card games known as ‘climbing games‘, wherein each player must play a higher ranking card than the previous player.

The object of the game is to run out of cards. The first to do so is the Governor General, second the Prime Minister, followed by Citizens, and the last the Asshole.

On the first hand of play, one randomly chosen player will shuffle and deal out all of the cards, one at a time, starting with the player on their left. It’s okay if some players end up with more cards than others – this is normal.

To play the game, starting with the player left of the dealer, each player will take turns playing one card, or one set of cards (sets must be same value). The first player may play any card, or set of cards (2, 3 or 4 of the same value card), they wish. The next player must play the same number of cards as the last, but the value must rank higher.

The rank of cards almost follows normal poker values, except that the 2 is highest of all. They run, from highest to lowest as follows:

Any player is allowed to Pass anytime they wish. If they cannot play a higher card/set, or simply do not want to, they may pass. There is no penalty for passing. In some variations, players are forced to play if they can, but I can tell you from experience, this makes the game a lot less interesting.

To better explain the rules and passage of play, we’ll use an example of a typical hand. We’ll assume there are 5 players, labeled P1, P2, P3, P4 and P5, with P1 being the first to act.

Notice in the 4th round of play, P2 thru P5 all passed. When all players pass, all previously played cards are picked up from the middle of the table and placed face down in a pile to the side. The value of cards now resets. The player who was last able to play (in this case, P1), will lead any card(s) they wish. For this reason, in our example, P1 was able to play a 3, a lower ranking card than the previously played set of two 2s.

The game continues in this fashion until all but one player run out of cards. The first player to run out of cards is the Governor General (GG). Second is the Prime Minister (PM). All other players (except the last) are deemed Citizens. The final player to hold cards is the Asshole (Beggar, Bum, Scum, Scumbag, etc.)

Second and all Subsequent Hands

The reason for rankings is important, because most players take their rank very seriously!The players will be seated by rank for each subsequent hand. The GG will choose the most comfortable seat in the house. The PM will seat to his/her left. The citizens will follow, with the Asshole in the last, and most uncomfortable seat (milk crates are perfect for this!)

The Asshole, now seated right of the GG, gets all the grunt work in the following hand. He/She will pick up all the cards, shuffle them, deal them, remove piles when the values reset, etc. Some variations also call for the Asshole, at the start of the hand, to give his/her highest ranking card to the GG. In turn, the GG will give the Asshole any single card they don’t want. The game then plays out as usual.

A typical game of Asshole can last quite a few hands. Points are only awarded to the GG and PM of each game. The GG gets 2 points, PM 1 point. Citizens and the Asshole get nothing. A score goal is agreed upon before the start of the game, with 11 being a common choice.

There are many, many variations in Asshole rules. So many, in fact, that we’ve dedicated an entire, separate page to it. You can read more about them here:

If you’re interested in learning more about the game, or your to enjoy it with adults and alcoholic beverages, out our Asshole History and How to Play Asshole Drinking Game pages as well.