Asshole (aka Scum) is a card game for all ages (depending on what you call it, of course). But for adults, it can also be a fun drinking game. Before the game starts, it’s recommended to have some type of alcohol at the ready. Beer, wine, liquor shots – pick your poison! Each player should have access to a drink at all times. 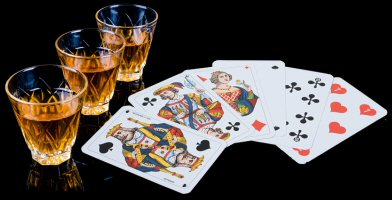 Before we go any further, make sure you know How to Play Asshole. There are also a lot of possible Asshole Rule Variations you may want to consider. Once you’ve gone over the rules and variations on those pages, come back here to learn how to incorporate drinking into the game. Each of those links will open in a separate browser tab for your convenience.

There are several opportunities in which players will be forced to drink during a hand of Asshole. Once the second hand starts, you can expect many more beverages to be consumed (especially by the poor schmuck who lost!)

The quickest way to get your insobriety on is to pass your play. In traditional rules, players can pass any time they like, whether they have the ability to play or not. If you want a sip, go ahead and pass. By some rule variations, however, play is obligatory. If you can play, you must; if not, pass (and chug!)

Standard rules don’t call for skipping players, but if you’re going to play Asshole as a drinking game, you’ll want to invoke the equal rank rule. Any time a consecutive, equal rank play is made, the next player must skip their turn, and take a drink.

At the end of each hand of play, the winner is declared Governor General (President, Emperor, Supreme Ruler, whatever name you use). On the next hand, at the start of the GG’s turn, he or she can choose one player to take a drink. It’s just another perk of being so powerful!

Depending on how many players are present, you may decide to give the Prime Minister (Vice President, Second in Command, etc.) the power to choose one player (of lower stature) to take a drink. In this case, the Governor General should choose 2 players to drink.

At the end of each hand, the losing player – the Asshole – must take a drink. This player can also be ordered to take a drink if they aren’t performing their duties well enough, or fast enough.

According to basic rules, the Asshole is in charge of clearing away all cards, shuffling, dealing, pouring new drinks, and any other menial duties agreed upon at the start of the game. Should the Asshole forget a duty, or move too slowly, all other players can yell, “Drink! Drink! Drink!”, at which point the Asshole must oblige.

You don’t have to abide strictly by these rules. You can always get creative and throw in a few of your own, if you want. Just make sure everyone understands the terms before starting. When deciding how to play Asshole as a drinking game, all players must agree. You may even want to write them down, because chances are, after a few hands, someone may be too intoxicated to remember!