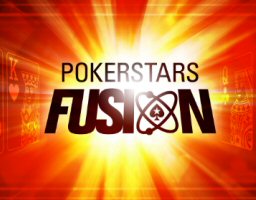 For ages, we have played the same poker games. 5 Card Draw, 7 Card Stud and Hold’em Poker are the only ones to have stood the true test of time. Other variants and hybrids tend to gain short-lived fad-dom before disappear into the mists of the past; played only on rare occasion or by a small, niche group of players.

I suspect that’s what will happen to the latest hybrid poker game that went live on PokerStars this week. It’s called Fusion; a mixture of Texas Hold’em and Omaha Hold’em. The game employs a Pot Limit betting structure, 6-max seating, and, according to its creators:

“…mixes two well-loved formats together, giving an exciting twist to the game.”

Is that really what’s happening? Or is Stars just looking for a way to get more people into PLO? Let’s examine…

Here’s how it works. The game starts out just like Texas Hold’em Poker. Each player receives two face-down hole cards, followed by a standard PL betting round. When the Flop is dealt, each player will receive a 3rd hole card, face down. Next, a fourth hole card is dealt after the turn. By the time the river is played, it’s nothing but straight PL Omaha.

At the showdown, everyone has four hole cards and 5 community cards. Exactly two holes and three community cards must be used by each player to develop a final hand.

So, is this a mixture of Texas and Omaha Hold’em? Or is this just a delayed version of PLO, wherein the players have to wait for the hand to progress before knowing what they really have to work with?

Either way you look at it, there’s one huge problem with this format.

For professional poker players, being able to employ skill is what makes them consistently better than their opponents. Anyone can win a hand on luck, but a truly skilled poker player will win more often, not by chance, but by design. Because they know the math, they understand the psychology, and they calculate every move—every check, bet, raise, or fold; every muck or show—accordingly.

The Fusion Hybrid format takes away from that ability. In a normal hand of poker, a veteran player knows their odds of being beaten. They study their opponents betting habits to put them on a range of hands, and understand exactly how likely the next community card is to help that opponent. But when you’re delivering a range of new cards to every player, both publicly and privately, after each round of betting, it changes the dynamics of the game, leaving so much more to chance.

For the moment, some players are having a great time with this game by simply employing a standard PL Omaha strategy, with slight adjustments to compensate for X variables. And for the moment, it’s working, simply because NHL players lack proper understanding of PLO hand strength.

A strong hand in PLO looks nothing like a strong hand in NLH. TPTK (top pair with top kicker) is a solid hand to move forward with in Texas Hold’em. In Omaha, it’s pretty much a death sentence. But right now, that’s what a lot of players are moving ahead with, and it’s doing wonders for the bankrolls of moderately skilled PLO players.

Don’t get too comfortable though. The consistent losers will stop playing. The consistent winners will find their consistency overshadowed by the domination of chance. A few weeks from now, Fusion Poker, like so many oddball variants before it (anyone remember Unfold Poker?) will either fade away, or become a niche game that only bored professionals with fat wallets will care to play.