For a limited time, 888Poker is hosting a special promotion that all members can take part in. It’s based on a series of daily freeroll tournaments, and is guaranteed to deliver cash prizes worth up to $500,000 before it’s over. No cost, no risk, only rewards—that’s my kind of promotion! 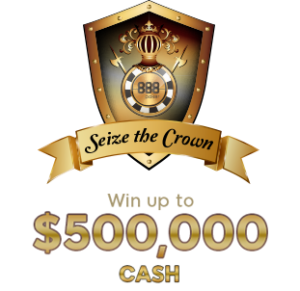 This promotion is ongoing, and will continue through October 2, 2018. Participation is conditional, but 100% free. All you have to do to join in the fun is play real money poker at 888Poker’s, for a chance to win a seat in daily $10,000 Royal Crown Freeroll Tournaments.

These tournaments are held every evening at 7:30pm GMT (3:30pm ET). Registration is free, but the tickets aren’t available to just anybody. You’ll have to win one. And to do that, you’ll have to win a hand of real money poker, in a cash game or tournament, while holding a “Royal Pocket Pair”.

A royal pocket pair is hole cards of J-J, Q-Q, or K-K. If you’re dealt these cards in a qualifying cash game or tournament (see below), and go on to win the hand, you’ll instantly receive a ticket to a $10k Royal Crown Freeroll.

Playing in the freeroll will give you a shot at your share of the $10,000 prize pool—that’s a given. But that’s not the only way to win a piece of the lucrative promotional giveaway, worth as much as $500,000.

Players can win up to 2 Royal Crown Scratch Tickets each day, and every one is a guaranteed winner of a cash prize. The value of the prizes range from $1, all the way up to the grand prize of $500,000.

The odds of winning each prize is as follows:

In order to qualify for a Royal Crown Freeroll ticket in a cash game or tournament, you must be playing real money poker games. Minimum cash game stakes start at $0.02/$0.05, in any poker variant available on 888Poker. All tournaments, including BLAST tournaments, with a minimum buy-in of $1 (not including fee) are also eligible.

Only members of 888Poker who have made at least one deposit are eligible to participate in Royal Crown Freerolls and receive Royal Crown Scratch Tickets. You can read over the complete rules and terms of this promotion by visiting 888Poker.