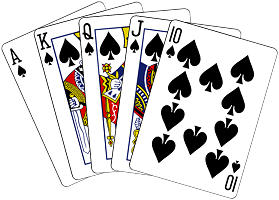 If you’re completely new to the game of poker, you’ve come to the right place. You can’t win poker games if you don’t know what hands to put together, and which ones outrank the others.

Today, we’ll cover all possible 5-card poker hands, from the menial ‘High Card‘, right up to the ultimate ‘Royal Flush‘. Each hand comes complete with definitions and examples, so you’ll never miss out on an opportunity for a big win.

The following is a detailed description of all possible poker hands, listed from lowest to highest. Before we get start, though, you’ll need to know what a ‘Kicker’ card is.

A Kicker is the next highest card in your hand that’s not involved in the ranked hand. Unless all 5 of your cards are used to make up your poker hand, you will have a Kicker card. The Kicker is used to decide ties.

For example, let’s say you and your opponent have the following hands:

You each have a Pair of Aces, but you will win the pot. You have a Jack Kicker, whereas he has a 10 Kicker. Since your Jack is higher than his Ten, you win. If both players have the same Kicker card, the next highest card is compared, and so on. If, by chance, all the card value match, it is a tie. The players will split the pot.

Now, back to our poker hand rankings… they are, lowest to highest:

When none of your cards match up into a pair or anything better, you have a High Card hand. This is the lowest of all hands in poker, but has been known to win a few pots. The higher your highest card is, the better. Card ranks, highest to lowest, are:

You have a pair when any two cards in your hand are of the exact same rank, such as two 3s, two Jacks, or two Aces.

Three of a Kind

A Three of a Kind occurs when a hand contains three cards of the exact same rank, also known as a ‘Set‘.

A Straight is a poker hand in which all 5 cards are ordered in sequence. The highest card in the hand determines its strength against any player who might also have a Straight.

This is where card suits (club, diamond, heart, spade) finally come into play. A Flush is a hand where all cards are of the same suit. The value of the cards do not matter, unless another player also has a Flush. In this case the highest card(s) determines the winner.

A Full House (aka Full Boat) is a combination of a Pair and Three of a Kind. Two of the cards are of equal rank, and the other three also of equal rank.

Four of a Kind

You have a Four of a Kind (aka Quads) when four of your cards are of the exact same rank.

Another combination hand, a Straight Flush is a hand that contain 5 cards in ordered sequence, all of the same suit.

The best poker hand you can possibly have is a Royal Flush (aka Royal Straight Flush). It is the same as a Straight Flush—all cards in sequence and of same suit—that ranks Ace High.

Knowing the poker hand rankings, in order, is crucial to playing any variant of the game, whether it be 5-Card Draw, Hold’em or Stud. Make sure you get in plenty of practice recognizing each of these poker hands, and memorizing their rank. It’s awfully embarrassing to lay down a Straight, grinning ear to ear, thinking you’ve beaten the guy with the Flush, only to have your hand slapped away as you reach for the pot.