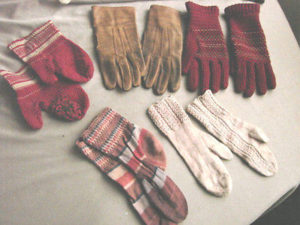 “Mitaine” is a French word that is pronounced much like its English translation (but with the traditional French accent, of course) “Mittens”, a.k.a. Mitts. As its name implies, the game is of French-Canadian descent, but little else is known about its origins.

Mittens is played with a standard deck of 52 cards (no jokers). It can be played by 2 to 4 players. With 2 or 3 players, it’s a singular game; every player for himself. With 4 players, it is a partnership game in which the partners sit across from one another.

Card ranks from highest to lowest value as follows:

Being the highest ranking card, Mittens, Gloves and Socks of Jacks are worth more points than groups of any other card rank. Also, the 10 of Diamonds is worth extra points for the player who captures it during the game.

The dealing of cards will depend on the number of players participating:

2-4 Players: Dealer deals 3 cards at a time, clockwise, to the other player(s), then 2 cards face up to the discard pile, and three to himself. Then, repeat this process so each player has 6 cards, and the discard pile has 4. The discard pile should face up, with the cards fanned to reveal each card.

After the first round, the process is repeated one time for a 4 player game, but with no extra discards, or three times for a 2 player game, also with no additional discard pile.

3 Players: Same as 2-4 player game, except players receives 8 cards each (4 at a time), and 4 to the discard pile (2 at a time). After the first round, one more round of 8 cards each (no discards) is dealt to finish the game.

How to Play Mittens

The player left of the dealer begins, with play flowing clockwise from there. Each player will add one card from their hand to the discard pile. The object is to clear the discard pile, and capture points, in one of three ways.

The first is by Calling a Mitten, Glove or Sock (see below). If no one has called a mitten, glove or sock on the current discard pile, players can clear the pile and possibly capture points by:

During the normal coarse of play (and on the respective player’s turn), a player who has two or more the same rank card may call the appropriate group; Mitten if they hold 2 of the same card, Glove for 3, or Sock for 4. After doing so, this player will play one of those cards on the discard pile. They will continue to do so with each consecutive turn, until the group called is completed, unless the pile is stolen (see below). For example, in a 2 player game…

When a group is captured, the player who captures it will take the entire discard pile. What happens to the cards in the pile depends on what was captured:

Mitten: The player takes one card from the Mitten and places it face up next to him. The rest of the discards are placed face down in the Waste pile.

Glove: Two cards from the group are kept. One is placed face up, and the other face down underneath. The rest of the cards are discard to the Waste pile.

Sock: Three cards are kept from the group, one placed face up, and two more face down beneath it.

Play continues in this fashion until all players are out of cards. Another round of cards is dealt, and the game continues until no cards remain.

Opponents are able to steal Mittens, gloves or Socks if they have a group of cards that outrank the previously called group. For example, if Player 1 calls Mittens and plays a 7, Player 2 can call Mitten (or larger) by playing any card higher than a 7, and completing that Mitten. If Player 2 calls a Mitten in Queens, Player 3 could then call a Mitten in Aces or Jacks, or a Glove in any card rank, since any Glove beats any Mitten (and any Sock beats and Glove).

If a player has 2 or more of the card on the top of the discard pile, and that card is not already part of a called group, the player may add the same rank card and call the corresponding group (Glove or Sock). But beware…

If the next player is able to play the same rank card and compete the group, they will steal it for themselves. This is known as “giving a glove/sock to your opponent”.

If the discard pile has only one card in it, and the next player discards a card of equal rank, that player automatically captures the Mitten. Because the Mitten is worth 10 points, and the discard pile is subsequently cleared, this is called “Clearing for 10”.

A Double Mitten is scored when there are no cards in the discard pile, one player calls a Mitten, and the next player is able to match the card rank called. This player scores a Double Mitten—one for the Mitten called by the other player, and another for stealing the Mitten.

A Double Glove is scored in a similar fashion. In this case, if one player calls a Glove (meaning they have all three of a card), and the next player is able to play the fourth card of that rank, this player captures the called Glove, and an extra Glove for stealing it.

The Jack is a special card when no call for Mitten/Glove/Sock has been made on the discard pile. Playing a Jack at this time will instantly empty the discard pile. It is not worth any points (unless the 10 of Diamonds is in the pile), but can be useful in preventing others from capturing easy calls on a well-stocked pile.

For example, you are Player 1, and the first to act after the initial deal. The discard pile starts with two 10s in it. If anyone has the remaining 10s, this can become an easy Sock for them. Clearing the pile with a Jack prevents it.

Jacks are also the highest and most valuable card rank. The rules of capturing and stealing groups remain the same, but the point values are much higher (see Scoring below).

The 10 of Diamonds can be played and grouped like any other 10. However, it is worth 50 points. Whoever captures this card will place it face up in front of them to claim its value.

The following point values are assigned to the corresponding group names. Remember, each group (Mitten, Glove and Sock) is signified by the number of cards face up and face down (see above).

Want to learn more about the French Canadian card game of Mitaine? Continue your education with the following links: