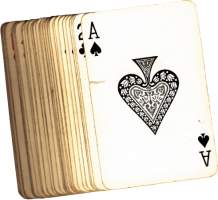 Almost anyone who’s ever played Canadian Salad will tell you it’s one of the most entertaining card games of all time. A compendium game with anti-trick catching rules and variable penalty points, there are quite a few ways to play it these days.

Canadian Salad history isn’t too well known, but one thing is for sure. As it gained popularity, it took on a wide variety of rule alterations, as well as many other names. And rightfully so.

While it is known that Canadian Salad got its start in North America, it’s almost certain that it was invented somewhere in Canada. That theory is not based on the name, but rather the fact that it’s played more in the Great White North than anywhere else on the planet.

I suppose it is possible—although unlikely—that ‘Wisconsin Scramble‘ was the first such game to appear, and it spread northward from there. If that’s the case, it certainly didn’t gain the same long-standing fame that it did once it was introduced above the 49th parallel.

The game is believed to have been played as far back as the early 1900’s. There are several accounts from today’s generation claiming that their parents, grandparents, and even great-grandparents enjoyed Canadian Salad. Most likely, it appeared within a few years of Hearts, as the resemblance seems beyond coincidence.

In Canadian Salad, there are six rounds of play, each requiring players to avoid catching certain tricks, or any tricks at all. The second round is known as ‘Catch No Hearts‘; wherein every heart captured generates 10 penalty points. This round alone is essentially a game of Hearts.

In the United States, the game goes by a variety of others names. Some, much like Canadian Salad and Wisconsin Scramble, are region specific. Not all titles apply to a locality, though. The most popular name for our southerly neighbors is actually ‘Fruit Salad‘, or simply ‘Salad‘.

As the game spread, its most avid fans sought out ways to make things a bit more interesting. Removing certain low cards and/or doubling the deck size allowed them to play in variable group sizes, permitting anywhere from 3 to 8 players in a game.

Most rule changes had more to do with the range of hands. By the traditional rules of Canadian Salad, there are only six rounds of play. In the first, players would avoid catching any tricks at all. Round two is ‘no hearts‘, round 3 ‘no queens‘, then ‘no king of spades‘, ‘no last trick‘, and finally ‘all of the above‘.

Today’s Canadian Salad variations call for up to 12 rounds of play, including all of those named above, and just as many more (‘no reds‘, ‘no evens‘, ‘no faces‘, ‘no sevens‘, ‘no aces‘, ‘no one-eyed faces‘). Clearly, players were looking to extend the game and overall entertainment value.

Another goal may have been to eliminate the fact that it’s really anybody’s game up until the final hand. With less hands played, whoever performs worst in the last round is often the one who loses the entire game. Playing as many as 12 hands per game helps to diminish some of the luck factor, and increase the ability to employ an effective Canadian Salad strategy.