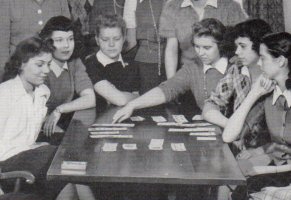 Bridge is a fascinating card game that’s enjoyed immense popularity throughout Canada for nearly a century. First developed in the 1920s, the game is played throughout the world, albeit with regional rule variations. Canadians tend to prefer the more traditional rules of Contract Bridge, or Rubber Bridge. In tournaments, Duplicate Bridge rules are often applied.

The history of Contract Bridge is laced with an intriguing, ancestral lineage. Although this particular card game wasn’t invented until the early 20th century, it can be linked back much farther. It is a direct descendant of a 17th century, English game known as Whist. That game, in turn, was derived from a 16th century game called Triumph, or Trump.

Triumph was the first game known to utilize a trump suit. Later, Whist took over as the derivative trick-catching card game that took members of British nobility by storm. A multitude of poets wrote if its popularity throughout the 1600’s. The rules of Whist often seem juvenile compared to today’s game of Bridge.

In Whist, four players – two partnerships – played with a standard 52-card deck, just as Bridge is played today. However, players did not auction (bid) for trump. Instead, trump was determined by turning the very last card (belonging to the dealer) face up. The suit of that card would become trump, and the card would then go into the dealer’s hand.

It wasn’t until Whist spread to the Middle East – particularly to Turkey – that the game began to evolve into the game of Bridge we know today. In the late 19th century, bidding for trump and the use of “doubles” and “re-doubles” emerged. Exposing the dummy’s cards also came around this time.

By the early 19th century, this new variant became known as Plafond (Eng. Ceiling) in France. Elsewhere, it was labeled Auction Bridge.

In 1925, an American railroad executive, champion yachtsman and card gaming enthusiast by the name of Harold Sterling Vanderbilt invented Contract Bridge. While the basic rules of the game followed that of Auction Bridge, he devised momentous alterations to the scoring system. Although much more complex, his version immediately captured fans of the game, compelling them to leave the old variant behind. Vanderbilt’s rules of Contract Bridge have been the most widely utilized ever since. 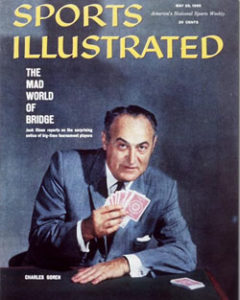 By 1928, the game’s popularity was such that competitive tournaments were held across North America. Its inventor endowed the first Vanderbilt Cup that year. It’s been awarded to the winning team (aka Vanderbilt Knockout Teams) of the North American Bridge Championship (NABC) each year since. Vanderbilt himself won his own trophy in 1932 and 1940.

The history of Bridge hit its pinnacle in 1936 when Charles Goren (aka “Mr. Bridge”, Vanderbilt Cup winner in 1944 and 1945, and 8-time runner up) published the Bridge strategy guide, “Winning Bridge Made Easy”. Within its text, he included a point count system that helped players to determine the value any hand, and bid appropriately. That system is still in use today, as is his “Standard American” approach to bidding, found in Goren’s 1942 publication of “Contract Bridge Complete”.

Around the 1930’s, another popular form of the game, known as Duplicate Bridge was introduced into tournament games to eliminate much of the ‘luck’ factor that comes from randomized shuffling of the cards. In Duplicate Bridge, after the first hand is shuffled and dealt, all other tables of players are dealt the exact same hands. In this way, every team is given the same advantage/disadvantage. The difference in how each team plays those cards determines who will come out on top, thus ensuring skill will prevail over chance.

Want to learn more about this popular Canadian card game? Have a look at our other page: