Countless Canadian players enjoy Contract Bridge, especially Rubber Bridge, every week. Some play for sheer entertainment, others for prestige and even cash prizes. To be among the latter, you’ll need to have a supreme understanding of the rules, a good deal of experience, and a partner of equal aptitude.

Applying strategy for Bridge relies predominantly on the partnership being able to communicate information, albeit limited. Information can only be conferred through bidding, and there’s very little you can say.

Both partners should be gauging their hands on the same points-based system, and understand what information is being conveyed with each bid. Note that the opposing team must also be aware of the bidding system in use.

I won’t go into the full details of the different bidding systems, as there are a multitude of them in common use, and some are very intricate. I would encourage you, however, to do some research into Charles Goren‘s classic point bidding system. That link will give you a simple yet thorough run down of card values, opening bids, responses, and other considerations. Make sure you completely understand the rules of Bridge first, or it won’t make much sense.

A champion player himself, Charles Goren (1901-1991) published a number of Bridge strategy guides over the years. His first, Winning Bridge Made Easy (1936), was considered one of the greatest of all time. In 1948, he published a replacement of that book, Contract Bridge Made Easy. Despite its age, this book is still a great read for anyone hoping to become a successful bridge player. 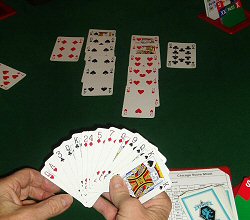 Doubling is one of the most important factors in any Contract Bridge game. When you double, it is essentially a dare for the previous bidder (opponent to your right) to win the bid. Following a high bid, it tells your partner that you believe your hand is strong enough to stop the bidder from capturing enough contracts. However, as the name implies, the points are worth double.

A Re-Double is essentially the same thing, but can only be said by the next player (bidder’s partner) after their opponent doubles. To re-double is to say, ‘Oh yeah? I got your back partner, we can do this!‘ And four quadruple the points, if successful.

Please refer to our Bridge Rules Scoring section for more information on doubling and re-doubling.

Doubling is a formidable weapon, but due to high penalty points, one that should be used with extreme caution. The best time to use such a weapon is when your opponent has clearly over-extended their hand. For example, if the contract has resulted in your opponent bidding as high as 5 or 6 in a suit, take a very close look at your hand and see if you can catch just enough tricks to blow their game up.

With the Q♥, plus three lower hearts, you will be able to catch something with the Queen, so that’s 1. You also have the A♣, that’s a likely 2. Your K♠ is strong, and so is your Q♦ (since you have 3 others), bringing your probable catches to 4.

Now, we must assume the declarer will be low, if not empty, on one suit – at least by the time you get around to high-carding it (especially that Q♦) – so we’ll subtract 1 for that. You should be able to count on your partner to catch at least 1 trick as well, especially if you convey enough information during bidding to know if he’s holding any strong cards of particular suits.

That leaves your trick-catching potential at 4; one more than you need to blast your opponent’s plan out of the water. Double!

When NOT to Double

Be careful about doubling on any low bid. You can end up conveying bad information to your partner this way. If someone bids 1D, and diamonds are your longest and strongest suit, your first instinct will be to double. Don’t.

Doubling will only serve to tell your partner that you have high cards in other suits – not diamonds (because they must assume the bidder has the high diamonds). The end result, almost every time, will be your partner out-bidding in a different suit, thinking you can help them. And worse, your opponents will double back on you!

Don’t make this amateur mistake. If the bid is low, and you have them beaten, just pass. Employing proper Bridge strategy bidding techniques takes practice, patience and a lot of discipline. Take your time, learn the right methods, and you will get there.