The suspenseful drama of an illusionist’s act unfolding on the biggest stages of Sin City is like no other experience in the world. Las Vegas does everything up bigger and more flamboyantly than any other place on the planet. From the classic shows of David Copperfield, to the don’t-blink phantasmagoria of Criss Angel, to the hilarious hi-jinks of Penn & Teller—Vegas casinos are the playground of the most remarkable magicians in the world.

Now, thanks to Pragmatic Play, you can experience the wonders of Las Vegas magic from the comfort of home. The digital slots developer’s latest creation combines the classic imagery of a professional act with the digital generosity of a 96% RTP. It’s all packed into 5 reels and 20 paylines in Pragmatic Play’s new Vegas Magic Slot.

The new Vegas Magic Slot has everything an illusionist needs for a successful magic show. The 5×3 reels represent the stage. The magician is the Wild, with potential to expand on all wins. His lovely assistant is the highest paying standard symbol in the game. The other high-paying images are the objects of his trade—tiger, dove, hat, and magical rings. On the lower end are jeweled playing card suits; spade, club, heart and diamond.

Vegas Magic comes with a Cascading Reels Re-Spin function they call the Tumble Feature. After any winning combination, all symbols involved in the win magically vanish. The remaining symbols fall to the bottom of the reels as more symbols drop down to fill the empty spaces left behind. 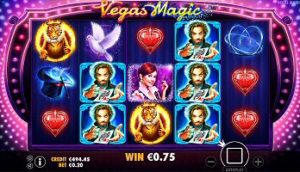 The diamond-studded dollar sign is the Scatter symbol. It can appear on all 5 reels in the base game and during tumbles. You won’t get any free spins out of it. the Tumble Re-Spins represent the closest thing to free spins in Vegas Magic. However, it is the highest paying symbol in the game. Landing 3, 4 or 5 scatters anywhere on the reels awards scatter pays of 100, 1,000 and 10,000 coins respectively.

The new Vegas Magic Slot by Pragmatic Play may not be quite as exciting as real Las Vegas magic shows. There are no live animals or death-defying stunts. But there are mysterious vanishing objects, and frequent Tumble strikes provide plenty of thrills and excitement.