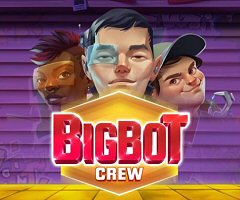 Bots may be taboo in the internet poker industry, but the online casino community is welcoming them with open arms following Quickspin‘s launch of the new Big Bot Crew Slot. It’s all about futuristic technology and the quest to build the ultimate robot.

The team at Quickspin, a subsidiary of the world-famous Playtech brand, is particularly proud of this latest creation. They’re calling it their “most action-packed offering yet,” filled with “fastmoving, high impact graphics”, and “unique Bigbot free spins and respins”.

Big Bots Crew went live last month at all Playtech online casinos that employ their flagship Quickspin portfolio of digital games. Have a look at our Big Bot Crew Slot review to learn more about its rules and features.

This new title doesn’t just come with reels and paylines—it comes with a backstory. It takes place in a futuristic metropolis where three techy teens—Matsuo, Danielle, and Joaquin—are attempting to build a superior robot they call the “BigBot”.

Players tag along in the quest, spinning the 4×5 reels to line up winning combinations on 40 paylines. Cost per play ranges from $0.40 up to $100, with a potential max payout of more than 5000x the total bet. The game’s symbols include the trio of young robotic engineers and two of their smaller robotic creations on the high end. Low paying symbols are four colorful gears.

The Big Bot is the wild, and can appear on a full reel, top to bottom. During the base game and respins, he only appears on reels 2, 3 and 4, and has the ability to nudge fully onto a reel. During free spins, he will always nudge into place, and can land on any reel. The wild substitutes for all other symbols except bonus scatters, but will not add a multiplier to winnings.

If the Big Bot wild appears on two or more reels at once, it triggers the game’s Respin Feature. The number of wilds that trigger the feature determines the number of free respins that take place. If another wild appears on a respin, it will trigger another respin, and so on. Every BigBot will hold in place until the respins are over.

The new Big Bot Crew Slot isn’t for everyone. It is a high variance game, meaning that the wins don’t come very often. However, when they do, the payouts are usually worth a good amount. High variance slots like this generally appeal to players with a sizable bankroll who don’t mind waiting it out for a big payoff.

Furthermore, Quickspin’s latest online slots creation has an RTP of 96.51%. That theoretical return is on par with the average profitability of today’s digital slot machines. You can play Big Bot Crew now at all Playtech casinos.