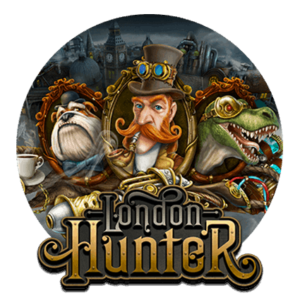 Once again, I’m blown away by the creative imagination and graphic superiority of Habanero Systems. The online slots development group loves to infuse entertaining and lucrative features into wacky themes, and that’s exactly what they’ve done in this week’s release of the London Hunter Slot.

Dinosaurs are running a muck in London, England, and only the bravest online slots fans can save us. Habanero sends players back in time to the Victorian days, with a little steampunk innovation in the mix. Add in a few bonus features and random progressive jackpots, and this machine is primed for spinning!

The symbols are a mish-mash of ingenuity that only Habanero would see fit to bring together. They include a vicious T-Rex, dino-fighting ‘Sherlock Holmes’ type sleuth, his trusty English Bulldog sidekick, antique smoking pipe, plus steampunk weapon and glasses. Ornate card values of A-J finish out the low-paying segment of imagery.

The T-Rex is the wild, substituting for all other standard symbols. He only appears on reels 1 and 5, and gives a ferocious roar when he creates a win. Most of the time, the game only pays for combinations aligned left to right. If, however, the Te-Rex expands on the reels, and a winning combination aligns right to left, and that combination pays higher than the same line would from left to right, the right-to-left combo will pay. 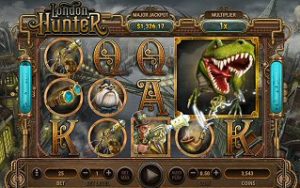 On each side of the reels are fuel tanks that will steadily fill with blue liquid as the game progresses. Each tank triggers a special feature once full.

The left tank will activate a 3x Multiplier. This multiplier will remain active until a winning combination is spun. That win will be paid at 3x its natural value. The tank empties, and begins refilling with additional spins.

The right fuel tank activates the Expanding Wilds bonus feature when full. Once active, the next time a wild T-Rex appears on the screen adjacent to the London Hunter, the wild will expand to cover a 2×2 position. If 2 T-Rex happen to land next to 2 London Hunters on the same spin, both wilds will expand. Once expansion occurs, the feature ends and the tank drops to empty.

Triggering the Free Games Bonus isn’t easy. You’ll need a London Hunter on reel 1, weapon on reel 2, and T-Rex on reel 5, all in the same spin. When this happens, you receive 10 free spins. During free games, both tanks will start at empty, and are guaranteed to fill by spin 2-6. Once full, the left tank’s 3x Multiplier and right tank’s Wild Expansion will stay active for the rest of the free spins. The left tank will also award an additional 1x multiplier, and the right tank 2+ free spins.

Another Great Game from Habanero

I haven’t had too much time to play this one yet, but it’s got all the makings of a supremely popular game. It’s entertaining, innovative, quirky, engaging, and has some unique features that trigger pretty often. To top it off, this new Habanero slots game has an incredibly attractive RTP of 97.94%.