As these definitions imply, Microgaming‘s latest addition to its immense portfolio of interactive online slot machines for desktop and mobile is a beautiful creation. It features smooth, elegant graphics presented in such a way it mimics a retro-style 3 reel slot. Except this one has 5 reels and several lucrative features to help boost winnings.

This game is all about glitz and glam. Its creation was ostensibly inspired by the 1950’s Hollywood era. It’s not exactly what’s on the reels – although the 7s, cherries and other fruits are representative of the games in that classic time period – but rather how they’re displayed. The designers did a fantastic job on this one.

The Deco Diamonds logo is the Wild. On the surface, it’s a traditional wild, taking the place of other symbols to help create winning combos. It won’t directly multiply your winnings or anything like that. However, it can trigger a special Re-Spin feature.

When a base spin results in a win where one or more wilds are involved, all wilds will be held in place for a free, instant re-spin. It’s a one-time deal, though. Whether the free spin results in another win or not, the game returns to normal play. Unless…

The Deco Diamonds logo isn’t just a wild. It also serves as a Bonus symbol. If 3 or more land on a line (easier to achieve thanks to Re-Spina), a Bonus Wheel Game appears. This is a 3-tier bonus wheel (a la Mega Moolah, minus the progressive). 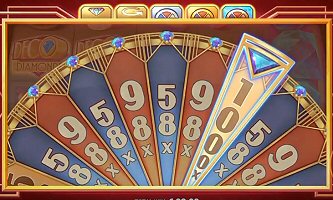 The first wheel has the lowest prizes, ranging from 5x to 80x the triggering bet. If the wheel lands on the Red Arrow symbol, the second tier wheel spins. This time, the prizes increase to anywhere from 8x to 98x. Another red arrow will initiate the third and final tier, where the highest prizes of 58x up to 1,000x await.

Which wheel a player stars on will be determined by how many wilds appear on the line in the base game. 3 wilds will start the player at the first wheel. 4 wilds moves up to the second wheel. If 5 wilds appear on a line, the player is instantly taken to the third and most lucrative wheel. With 5 wilds being the highest paying winning combination in the game, players can win more than 2,000x their bet if this happens.

Deco Diamonds by Just For The Win

The new Deco Diamonds Slot was actually the brain child of one of Microgaming’s newest dedicated software partners, Just For The Win (JFTW). It’s due for integration on the Quickfire platform any day now.

JFTW only has two games on Microgaming’s menu to date. This being their third release, it’s hard to say whether the game play will live up to its graphical beauty. The company previously launched Goldwyn’s Fairies, which was a huge success. However, their follow-up release, Lucky Links, wasn’t nearly so impressive.

Only time will tell if this online video slots game lives up to their initial success, or the reputation of the Microgaming name.