Are you a fan of old western films? Maybe you prefer family comedy genres, like the holiday classic Home Alone. Either way, you’ll get a real kick out of the new online slots game, Sticky Bandits. 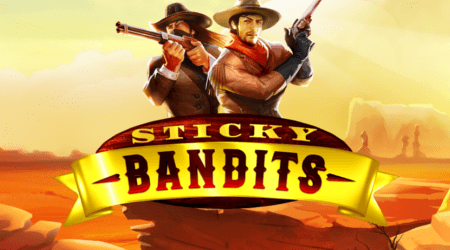 It comes with an old west slots theme, and if you didn’t catch the Home Alone reference before, you must not fall into that latter category of film buffs. Sticky Bandits was the name chosen by the pair of thieves in Home Alone 2, after the duplicitous duo stole money from Santa with duct tape. But I digress…

This new slots game takes players on a dusty frontier adventure. Stick Bandits features 5 reels and 30 fixed paylines, with a bet range of $0.15 to $90.00 per spin. The musical score is straight out of a spaghetti western film, adding to the overall appeal of the game (if you like that sort of thing). 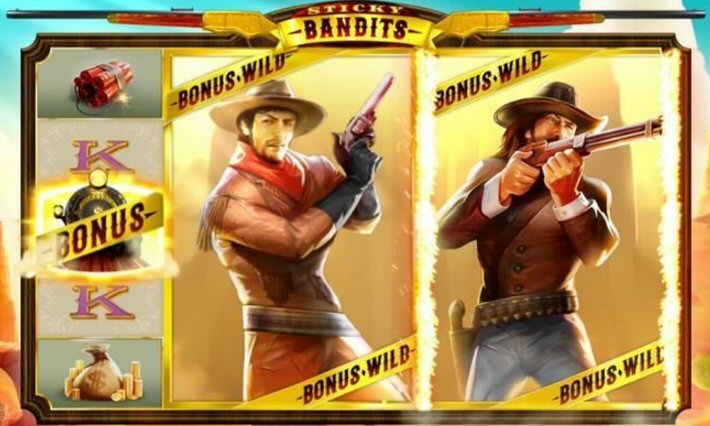 The main character symbols belong to a group of train robbers looking for their next big score, and one smoking hot cowgirl to spice things up. She’s actually worth more than either of the two bandits who appear as standard symbols. The other two bandits are ‘larger than life‘ so to speak, represented by 2×3-reel encompassing wilds.

Other high-paying symbols include a bag of gold coins and sticks of dynamite. On the low-paying end are playing card values J-Q-K-A. All symbols can, and often do, appear stacked on the reels.

The Wild bandits are unmistakable, mostly because they take up so much space on the screen. The first can cover the entire second and third reels, while the other covers reels 4 and 5. These act as stereotypical wilds, replacing any other standard symbol to produce the highest possible payout. 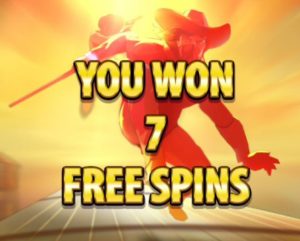 The first reel has its own special symbol – the train. This is a Bonus symbol that can only appear on reel 1, but when it does, it has the potential to unleash big wins. If any part of any wild symbol lands anywhere else on the screen, it will trigger 7 free spins.

Ah-ha! A sticky wilds feature. Finally we see where the name ‘Sticky‘ Bandits comes from!

Quickspin may seem like a relatively small developer of online slots games, with only 30 titles in its portfolio to date. However, this is one of those brands that emphasizes ‘quality over quantity‘, much like Yggdrasil and Habanero.

Following its launch last month, the Sticky Bandits Slot is now available at all Quickspin powered online casinos, including mobile gaming giant LeoVegas. Players can also try out some of their other popular titles, like Sakura Fortune, or Goldilocks and the Wild Bears.

According to Quickspin’s website, there are even more titles to look forward to in the near future. These include a woodland fantasy rendering called Fairy Gate, and a cartoon-style rendition of ancient relics in Mayana.