Everyone loves a good parody. Whether it’s poking fun at the latest hit horror film, or rewriting the lyrics of a popular song, parodies are the embodiment of good humor. With so many Oriental themed online slot machines on the market today, RTG has taken the concept a step farther with the release of its Kung Fu Rooster Slot.

RTG is tackling a number of misconceptions in today’s modern world. First a foremost, this fine feathered friend has gained an unfortunate reputation for lacking bravery. Cowardice behavior is denoted with the universal term, “chicken”. Well, not this chicken!

The Kung Fu Rooster Slot depicts a tactfully tenacious creature, not the defenseless and dejectedly flightless bird we’ve become accustomed to. And like all kung fu legends, he has a master – a stoic, white-haired monkey – who taught him everything he knows.

But enough about the theme. Let’s get down to what matters most – the features and profitability.

The Kung Fu Rooster Slot hit RTG-powered online casinos today, equipped with 5×3 reels, 12 paylines and a top payout of 50,000x the line bet. The low number of lines and abnormally high jackpot prize are indicative of the game’s high variance.

The online slot machine is beautifully rendered, with various karate-style weapons and other Oriental relics on the reels. The musical score is quite tranquil, and befitting of the regional theme. 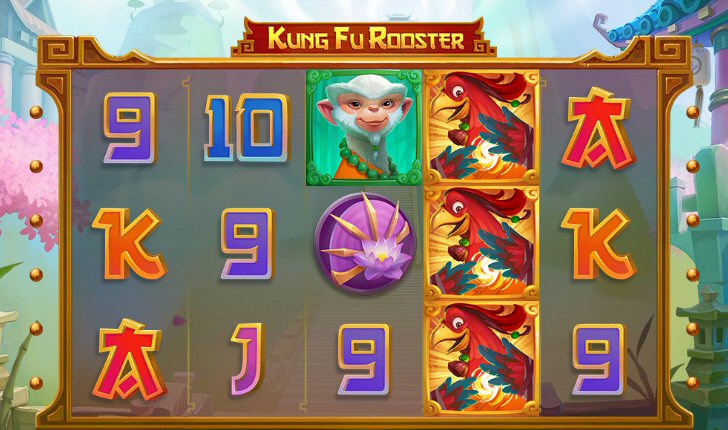 The Rooster is the highest paying symbol in the game, and also acts as the Wild. This courageous cock will take the place of any other symbol (except Bonus) to create a winning combination. He can appear stacked on any reel, delivering the highest possible 50,000x payout for landing Roosters in all 15 positions.

The Monkey is the Bonus (aka Scatter) symbol. Landing 3 or more of these in any position on the reels, in a single spin, will award the Final Trials Free Spins feature. Players earn 10 to 25 free spins, with a “chance” to award the Fire Claw Multiplier feature.

The multiplier, if randomly activated, will rise as high as the number of spins awarded, up to 25x. The first spin gets a 1x multiplier, second spin 2x multiplier, third spin 3x multiplier, and so on. The Bonus symbol won’t appear during free games, so there’s no chance of retriggering them.

I would like to have seen an extra bonus game in the mix. But what’s truly lacking is any fighting sequences or animations. The Kung Fu Rooster Slot does not live up to its name in that regard. There’s no real evidence that the rooster or his monkey master are capable of chopping a candy cane in half, much less a ferocious foe (perhaps a panda or goat).

To make matters worse, the game’s high variance was impossible to overcome, at least for me. It took 74 plays to hit the free spins. I only got 10, and the multiplier did not activate. Worst of all, the payouts were abysmal. I only won 47x the line bet, which comes out to less than 4x the total bet per spin. I wasn’t willing to invest any more at that point.

RTG could have done so much more with this. Instead, I found Kung Fu Rooster Slot to be a glorified chicken with a cut-purse personality!