Even more ways to play Hearts with alternate rules. 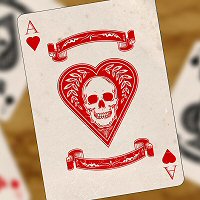 In our previous edition of Heart rule variations, we addressed a number of common ways to mix up the rules, either a little or a lot. We talked about playing Hearts with a Kitty and the utilization of more unique passing cycles. We also covered how to play Hearts with partnerships, and variant rules for 3 or 5 player games.

Today, we’re going to get a bit more radical, discussing a few less common variations—some so different they actually go by alternate names. If you’re getting bored with the original game and really want to spice things up, maybe one of these options will better suit your group.

The following list describes a few of the more intricate and interesting variations of the game. These alternate descriptions assume that you already know how to play the game by traditional rules. If not, or if you need a refresher, please refer to our original instruction:

This is the British version of Hearts, also known in some places as Black Maria. It can be played by 4 players, using the usual dealing sequence, but is most often enjoyed by 3 players, with the 2C removed and 17 cards dealt to each.

In Dirty Lady, Slippery Bitch, cards are always passed to the right (no cycling, mixing or scattering). The player left of the dealer will always lead to the first trick, and may lead any card they wish, even a heart.

There are three ways to go about scoring:

This unique variation of Hearts is designed for a larger group of 6-10 players. It requires two 52-card decks shuffled together. Each player receives an equal amount of cards, with any remaining cards going into a kitty. The player left of the dealer leads first with any card of his/her choosing. The player to catch the first trick takes the kitty and all points therein.

The name Cancellation Hearts refers to the result if two identical cards are played on the same trick. These two cards cancel each other out. If a spade is led, and two Ace of Spades are played to the trick, they cancel out. The next highest spade wins it.

If no other card is played of the leading suit, other than canceling cards, the trick stays on the table. The same player will lead the next trick. The player to win that trick will take both tricks. If no one wins the last trick of the hand, the player who won the previous trick wins it.

Our last and most hellish Hearts variation is called Dirty Nasty Filthy Hearts, because there are so many awful high-point cards that can be caught, plus a single good one to help offset. Scoring is as follows:

With so many dirty, nasty bitches (queens) out there, the target score increases to 300. After the cut, the dealer will call how cards are passed for the ensuing hand. It could be to the left, to the right, across, scatter pass, or a mix (aka Shittin’ In the Kitty), wherein all players pass 3 cards to the center, they all get mixed up and dealt out again, 3 to each player.

The first trick is led by the player with the 2♣. This first trick is called ‘The Calm‘, in which no points can be played. If no non-scoring cards of the led suit are available to play, you must play something else.