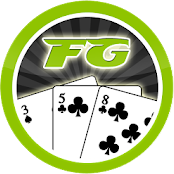 One of the most popular Canadian card games of all time is 9-5-2, a variation of England’s 8-5-3 trick-catching game. Its formal name, Sergeant Major, comes from its proclivity among the British Royal Navy more than half a century ago.

Today we’re going to examine the mobile game, Sergeant Major, optimized for Android mobile devices. It was developed by a company called Favorite Games LTD. It’s been around for awhile, and has undergone a few updates over the years, including the latest in May 2018 (v5.24.5)

Unfortunately, there aren’t a lot of mobile apps dedicated to this card game – none that proffer the precise 9-5-2 rules we Canadians are most familiar with. On the bright side, making the adjustment to 8-5-3 rules is simple enough. The only notable difference is the number of tricks each player must catch, and the option to bid No Trump.

Before we continue, let’s take a quick look at the game’s specs, as depicted on the Google Play Store:

When you first launch the game, you’ll be given the choice of Sergeant Major 3-5-8 or Online. The first option will let you play Sergeant Major against computers (Local) or real people (online). The second option is exactly the same (pointless), minus the choice of local play.

Warning: If you choose to play online, you’ll instantly be met with your first real challenge – registering an account. The registration window is incredibly small. When it comes time to choose your country, unless you’re in the United Kingdom (default setting), you’ll probably get really frustrated trying to move the slider bar up or down. I had to use a rubber-tip stylus to even get it moving without clicking another part of the screen, and it took over 5 minutes to find and press Canada. It really is that bad. I honestly would have given up if it weren’t for the sake of reviewing the product! Unless you seriously want a live-person game, just choose Local and avoid this madness.

In online play mode, there are two rooms to choose from, General and English. I’ve never seen anyone in the English room, but the General room always has at least 5 tables open; many more during evening hours and weekends.

You can create a table, join a table or watch a table in progress. Tap a table with an open seat, then press Join to be seated. When there are three players, the game will commence. Assuming you know how to play Sergeant Major 8-5-3, it’s all self explanatory from there. 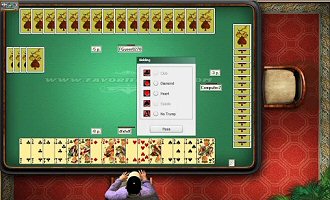 As for pros, there are a few. Aesthetically, the game is appealing. It’s simple to navigate (after registering) and enjoyable to play, once you get as game moving. The truth is, there’s only one problem, but it’s a really, really big one!

I’ve already mentioned the registration process being a pain in the you-know-what. But once you’ve registered, at least you never have to deal with that issue again. Ads, on the other hand, will be a constant source of frustration. The frequency and length of ads are annoying, but even that isn’t the real issue.

The moment the cards start dealing out, a video ad is displayed. You’re usually required to watch the ad for 25-30 seconds. While this is happening in a local (computer-player) game, the dealer is choosing trump and the first round is already being played. Unless you’re the dealer, you will not know what trump suit was chosen. In a live PvP game, you may or may not have this issue. Some ads can be closed before the 30 second window is over, and some cannot. If your opponents are able to start before you, and you aren’t the dealer, well… you’ll have to deduce the trump (or No Trump) as the game progresses.

The Verdict – Not Good

Unfortunately, the forced ads destroy the playability and enjoyment of this game. Many players have complained, but no attempt to resolve the issue has been made. All it would take is a small text display that shows the chosen Trump throughout a game, or just until the first round of play is over, but even that hasn’t been implemented. And for this reason, I cannot recommend FG’s Sergeant Major 8-5-3 app for Android smartphones and tablets.

Hopefully an update will come eventually to fix the problem. Or, better yet, some brilliant Canadian comes along and develops a 9-5-2 game for Android, minus the unresolved issues found in this app.