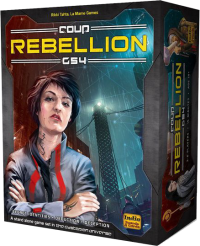 The following is a comprehensive guide to all Coup characters from the original game, special kickstarter promotions, and the extensive line-up of Coup: Rebellion G54 influences. The idea is to give you a better idea of what roles are available in the massive Rebellion expansion, helping you decide if it’s worth the extra cost to upgrade.

Alternatively, if you and your friends play Coup with standard playing cards, this list will allow you to change up the game immensely, without shelling out the extra coinage for the real thing.

Before we get started, here’s a quick key to reading the influence tables…

Player Aid / Influence: Effect when using the card (or deceptively claiming to have the card) on your turn.

Counter/Block: Describes what effects the role can counter or block. For example, an Assassin can be blocked by Contessa. Not all characters have blocking or counter effects. Most G54 expansion roles can only block their own actions, if any.