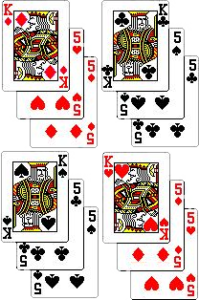 King Pedro (“pee-drō”) is a rather unique card game played in many countries all over the world—and known by about as many names. Here in Canada, we know it as “King Pedro”, although it can be played by two common sets of rules. There’s the standard Canadian King Pedro game, and the Ukrainian-Canadian version.

How to Play Canadian King Pedro

King Pedro is a trick-catching card game in which half of the trump cards are worth points. Players compete to capture the most points, generate the highest score, and thereby win the game.

You’ll need four players, split into partners who sit across from one another, and a standard deck of 52 cards.

For the most part, the rank of cards follow traditional values, from high to low. It only matters in trump suits, though. Non-trump suits have no rank. If a player leads non-trump, and no other player trumps it, the leader wins the trick, irrespective of the card’s rank.

Certain cards of the trump suit, and the Left Pedro, are worth points. Note that all points are scored by the team who captures them, except for the 2. The player who is dealt the 2 of trump receives this point.

After choosing a random dealer, 12 cards are dealt to each player, one at a time, in clockwise order. The remaining four cards are placed face down as the kitty.

The player left of the dealer will bid first. Players will bid the amount of points they believe their team can capture. The minimum bid is 7, maximum 44.

A player must bid higher than the previous bid, if any, or pass. If all players pass (no one bids), the hand is forfeit, and the next dealer will start a new hand. Otherwise, the auction continues around the table for as many rounds as needed until one player bids, and the next three pass.

The last to bid wins the auction. This player will add the four cards from the kitty to his hand, then declare trump. All players must now discard enough cards to reduce their hand to 6 cards. Trumps cannot be discarded; only non-trump cards.

Note – Too Many Trumps: If a player has more than 6 trumps, they must keep them all, getting rid of non-trumps only. This player will have to play more than one card on the opening trick; enough to reduce their hand to 5 cards (like everyone else) after. These cards are played in a pile, all face up, with only the top card showing. A scoring trump cannot be hidden beneath, unless the player actually has all 7 scoring trumps. In this case the 2 can be played on bottom, since this player scores the point for it anyway.

The player who won the auction will lead the first trick. If trump is led, all players must follow with a trump, if possible, or play any other card. The highest trump wins the trick, and the winner leads the next trick.

If non-trump is led, players can play any other card, same suit or not. If another player trumps, the highest trump wins the trick. Otherwise, the leader of the trick wins, regardless of card values. Even if leading a 2 non-trump, no other card but a trump can beat it.

If a player runs out of trumps, they will say, “I’m up!”, tossing in the rest of their cards. They can no longer participate in the hand (as it would be pointless, anyway).

Once all 6 tricks are captured, each team will add up the points they’ve caught.

Bidding Team: The team who won the bid must catch at least as many points as they bid. If so, they will earn all points captured. If not, they will lose points equal to the amount bid.

Defending Team: This team will always score the number of points captured.

The target score to win is 200 points. However, you can only win the game on a winning bid. If the defending team scores 200+ points, the game is not over yet. If the winner of the bid is set (doesn’t capture enough points), but still has 200+ points following the hand, it’s still not over. The game continues until the team who wins the bid, and successfully captures enough points, reaches or exceeds 200 points.

If you’d like to learn more about this unique card game, please use the following links.