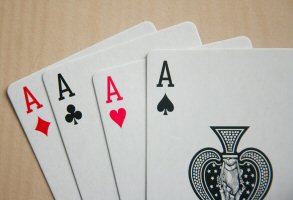 Hola! No, I’m not reverting to the Spanish language. “Hola” is the name of a popular Ukranian-Canadian card game played throughout western Canada. Its name comes from either Slavic or Ukrainian descent, meaning “nakedness” (Slavic), or “naked” (Ukrainian).

Designed for 2 players (or 4, with partners), Hola rules call for a standard deck of 52 cards. It can also be played by 6 players, utilizing two 3-player partnerships and a pair of standard decks (104 cards).

How to Play Hola

Hola is a trick-catching game of sorts, wherein players try to capture as many Aces and 10s as possible. All players are on equal ground, as there is no bidding or trump suits. The only way to capture a trick is to play a card of equal value, or a wild card (2s and 7s).

Each Ace and 10 captured is worth 10 points. No other cards have value, nor does capturing a non-point trick. The winner of the last trick receives an additional 10 points for a grand total of 90 possible points per hand.

The game begins by selecting a dealer (at random, or any other previously agreed upon method). The dealer will shuffle and deal out four cards to each player, one at a time. For 4+ player games, dealing and game play goes clockwise.

All remaining cards are set in the middle of the table, face down, as the stock pile (draw pile).

The player left of the dealer (non-dealer in 2 player games) will go first. This player may lead any card they wish. The next player can also play any card they wish, but can only capture the trick by playing a card of equal value, or a wild. Remember, 2s and 7s are wild!

If beaten, the player who led the trick can choose to concede or fight.

Concede: End the play, letting the winner capture the trick. The winner of the trick leads the next trick.

Fight: Continue the trick, leading another card. All other players must play another card, as well. The leader of the trick can continue to fight for up to four rounds of play, at which point all players will be out of cards. The last player to lead an equal value card, or wild, wins the trick.

The only reason the trick leader should fight is if he has lost the trick, and believes he (or his partner) can recapture it by continuing.

Once a trick is captured, all players, starting with the leader of that trick, will draw as many cards as necessary from the stock pile to refill their hand to a total of 4 cards. If there are not enough cards in the stock pile, players will evenly distribute the remaining cards.

Game play continues until all cards are played, and all tricks captured.

P1 collects all of the cards and turns them face down next to him. Starting with P1 (because he led the trick), everyone draws 3 new cards. As the winner of the trick, P1 will lead the next trick.

At the end of each hand, players (or teams, collectively) will count all of their captured points. 10 points are awarded for each Ace, and each 10. The player/team that won the last trick gets an extra 10 points.

Although rare, if one player/team captures all points (called an ‘Hola‘), they will receive 170 points; (double points for captured Aces and 10, plus the usual 10 for the last trick caught).

For 6 player games, no extra points are awarded for an Hola, or for capturing the last trick. However, utilizing 2 decks, there are a total of 160 points awarded per hand.

How to Win Hola

Hola rules don’t have a specific target score for 2 or 4 player games. Everyone should agree on a target score before starting, usually between 200 and 500, depending on desired game length. For 6 player games, the target score should be at least 500.

The first player/team to reach the target score wins the game.

Want to learn more about the game, or how to play Hola with similar rule variations? Continue your Hola education with the following reading materials.