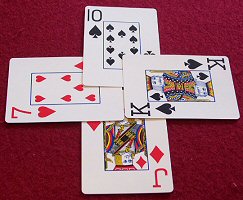 In Part 1, we detailed a multitude of Rule Variations for Two Hundred (200). In Part 2, we’ll deal solely with how to play 200 with varying amounts of players, or as a cutthroat card game, with no partnerships.

Serious players—especially tournament players—rarely invoke anything outside of the traditional 200 Rules. But for informal players, mixing things up can make the game more entertaining, and often more reliant upon luck than skill.

Eliminating partners from the game is simple enough, but it can greatly extend the length of each game, as well as increasing the difficulty of winning (hence the name).

In cutthroat games, all rules remain the same, except it’s every man (or woman) for themselves. Each player is responsible for accumulating their own score. Bidders will receive points for successful contracts, and lose points for failed contracts. Defenders will earn score for all points they capture.

If played as 200 with Kitty, the minimum 50-point bid may be upheld. However, when playing without a kitty, the minimum bid should be lowered to somewhere between 25 and 40 points, making it more feasible to win a contract. 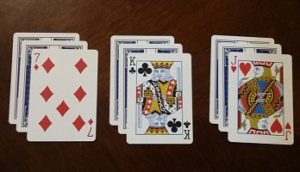 2 player 200 is a very interesting way to play. The same 36-card deck is used, and four hands are dealt. The two players at the table will be on opposite teams, each having a “silent partner” across from them.

The silent partner hands are dealt in three stacks of three. The top card on each stack is turned face up. (See image right.)

Only the live players will participate in bidding. When it is a silent partner’s turn to play, the live partner will play one of the face-up cards from the three stacks. Silent hands must follow suit, when able, using only the visible cards. Otherwise, game play and scoring continues as normal.

Although there are no formal rules for 5 player 200, it is possible to incorporate a fifth hand by playing cutthroat rules, with the winning bidder having a random partner for each hand. This variant would not use a kitty, since the contractor already has a significant advantage.

The game requires a 40-card deck of 5-Ace, and each player receives 8 cards. After bidding, the contractor will declare one card that he does not have. The player holding the chosen card will become the contractor’s partner, but they cannot announce it. No one will know who the partner is until this player plays the card that was called.

Score is kept individually, by cutthroat rules. The contractor and his partner will each score the same points, positive or negative. All other players score the points they capture.

Without a kitty, the game is played with 36 cards; 6 dealt to each player. With a kitty, either 40 cards can be used, or a full deck of 52, dealing 8 to each player. Note that the “misdeal” rule cannot be applied, since there’s a much higher chance of any player being dealt a junk hand (no Aces or Faces).

Bidding, playing and scoring follow the same rules as a traditional 4 player game. However, if playing with three teams, should one team’s score be in the hole (box) by 200 or more, and no other team has a negative score, this team is eliminated. The remaining two teams will continue to compete 4-handed for the win.

Want to learn more about the multifariously entertaining game of 200? Check out some of our other pages below: