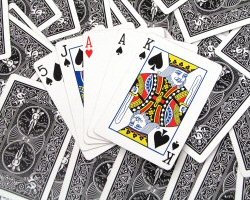 Auction Forty-Fives isn’t the easiest card game to learn, and is even harder to master. The order of rank does not follow traditional card value rankings, and can take some time to get used to. If you’re not yet familiar with the game, our first suggestion is to take a close look at the Rules of Auction Forty-Fives.

You may also want to look over some of the Popular Rule Variations commonly employed throughout different regions of Canada. Different rules, such as the dealer “robbing the pack”, or the use of a “kitty” instead of draw phase, should be incorporated into your strategy when in use.

Like so many trick-catching card games, the number one advantage you can have over your opponents is experience. That, and, when playing partnerships, an equally experienced partner (or partners). The more time you spend playing the game, the better you will understand how to structure your hand when it comes to things like discarding, bidding, defending and leading tricks.

The most important thing to understand is that every hand is subject to the luck of the draw. Even when your hand doesn’t appear strong, it could be the strongest at the table if the highest ranking cards remain in the deck. The simple fact that so many cards (especially in 4-6 player games) remain behind makes this trick-catching game incredibly hard to predict. That is one of the things that makes Auction Forty-Fives such an exciting game to play.

Fortunately, there are a few things you can do to strengthen your position in the game.

Your position plays a large role here, especially with 6+ players. If you’re late in the deal, you may not even get a chance to bid, forcing you into a defensive position. If you are early in the deal, you’ll need to bid strong to catch it. But be careful not to rely too heavily on the draw phase. There’s no telling what it will bring.

The dealer position can be a great seat. This player has the option to steal the bid if anyone has previously bid the highest possible 5 tricks. Plus, if the “rob the pack” rule variant is invoked, you’ll be able to glance through the entire remainder of the deck for the best cards to fill your hand. Either way, don’t waste a good opportunity to bid high in this position.

Knowing what to hold and what to discard is the most important aspect. Fortunately, everyone knows what the trump is by this point. Unfortunately, luck has everything to do with drawing, since you don’t know what cards you will receive in return. Be especially careful how many cards you throw away. The more you toss, the more junk you could get in return.

Creating a gap is a great way to make the most of your trump suits. If there’s a suit missing from your hand, you’ll have a better opportunity to catch tricks with trump. It’s easier to create a gap, or hole, in your hand when you are discarding only a single card. The more you take, the more likely you are to refill the gap.

As the bidding team, whether you won the bid or a partner did, your job is to play very close attention to how each player reacts to every lead. Knowing who is out of which suits can go a long way towards capturing a bid. The more players there are, the more likely there will be gaps in each players’ hands, giving them opportunities to trump over your team. Knowing when to toss out the big trump, and when to save it, can be the biggest difference between a positive and negative score.

As a defender, you’re in a precarious position. Your only job is to steal tricks from the bidding team. In general, you want to take every opportunity to do so, but if you are paying close enough attention to what your teammates are playing, you may be able to let one of them snag a trick, saving your best cards for later.

Also remember that the highest trumps—5, J and A♥ – can be held, even when a lower trump is led. If these cards didn’t come out yet, it’s safe to assume they are lying in wait. Use your low trumps early, because they could be useless later.

If the rules and strategies to win Auction Forty-Fives aren’t enough to satiate your appetite for knowledge, you can learn even more about this favorite Canadian card game within our Forty-Fives History page.