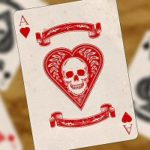 Hearts is one of the top five most popular card games in Canada, and among the most widely played throughout the world. It is a trick-catching game, but not like most in its genre. There is no trump to play to, and the idea is not to catch tricks, but to avoid them – especially any in the suit of Hearts and the dreaded Queen of Spades; aka ‘Calamity Jane‘, or as the Brits call her, the ‘Slippery Bitch‘.

The game of Hearts has deep roots and a rich ancestral lineage that dates back (at least) to 17th century Europe. As we know the game now, it originated around 1850. Hearts rules were simple back then, but evolved greatly in the last hundred years or so.

Hearts, along with a series of other anti-trick-catching card games, is believed to have been born from a much older game first known as Reversin – and later called Reversis. The oldest known mention of Reversin, a standard 52-card game, was in 1601 France. French philologist Jean-Baptsite Bullet dates it back a bit furhter, theorizing that the game was invented during the reign of Court of Francis I, who ruled France from 1515 to 1547.

Others believe the game originated in Spain, suggesting that it was first played with a traditional Spanish deck of 48 cards and counter-clockwise rotation of play. More likely, the game originates in Italy, where a series of older, negative trick-catching games derive, including Tressete games like Rovescino, which is still popular in Italian culture today.

What we do know of the history of Reversis tells us it was a subtle, uncomplicated game. There were few rules, and few additions to the rules, up through the 18th century. Around 1750, 1 penalty point was gained by catching any trick, while capturing the J♥ or Q♥ earned an additional penalty point.

In the 19th century, as its popularity spread, more intricate rules came into play, intensifying competition between players. Additional penalty points were enforced, evolving into the first true version of Hearts. Catching any heart was worth 1 penalty point.

From this, another game called Black Maria evolved. The rules were the same as the original Hearts, except that capturing the Queen of Spades would penalize a player by as much as 13 points. Black Maria was so popular, that rule was universally adopted, and became the game of Hearts as we know it today.

Shortly after the Queen of Spades became the most dastardly of all cards to capture, a new rule known as ‘Shooting the Moon‘ was introduced. This variation allowed players to gain a supreme advantage over their opponents by playing opposite the rules – capturing every penalty card. With each heart being worth 1 point, and the Queen of Spades worth 13, a player could impose a 26 point penalty on all of their opponents (or collect 26 positive points for themselves) by successfully shooting the moon.

In the last century, many more variations to the rules came about. Around 1920, the Jack of Diamonds became a positive 10-point card, although Canadian Hearts rules don’t generally enforce it. Passing cards before the start of a hand, Breaking Hearts, leading 2♣, and ‘Shooting the Foot’ were more recent additions that caught on in most regions of the world.

Here in Canada, most of us learned to play at a young age, shuffling up around the table at home with family or even in grade school among students and friends. The popularity of Hearts surged once more in the 1990s when Microsoft included the game in its Windows OS 3.11+ software package (along with other games like Solitaire, Free Cell and Minesweeper).

Over the next few decades, the internet gave birth to online Hearts games, where players can compete against others from all over the world. Internet Hearts games continue to ‘capture the hearts‘ of Canadian players, with free to play games, and even real money Hearts games and tournaments readily available.

The history of Hearts is fascinating, but not nearly so entertaining as playing the game. Please take a moment to continue your education on this popular Canadian card game with our Hearts Rules and Hearts Strategy.