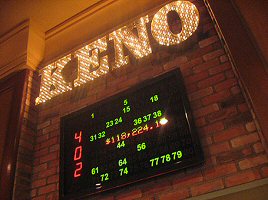 Keno is one of those casino games people tend to have strong feelings about. They either love it, or they hate it. Your opinion will likely rest on your reason for playing casino games in the first place. If you enjoy the thrill, the anticipation, the exhilaration of a win, keno may be a great choice for you. If you base your game selection on strategy and an inherent need to win, you’ll probably hate it.

Still not sure? Think about what other games you like. Slots fans tend to fall into that first category, playing for entertainment above all else, whereas card-counting, strategy-invoking blackjack players fall into the latter. And if that doesn’t help you, then I can only suggest you continue reading, where you’ll learn everything about the game, inside and out.

How to Play Casino Keno

There are two types of keno games. There are those that take place on a schedule – again, often found in Vegas. They usually take place each hour. Players fill out and buy tickets in advance, then wait for the number drawing to see if they win. Then there are electronic keno machines, where players simply choose their numbers, place their bets, then press the play button to start the drawing. No matter which version you choose, the rules are the same. Select your numbers and watch the drawing to see if you win.

Note that if you pick 3 or more numbers, you won’t have to catch all of them to win a prize. Catching 2 of 3 instigates a smaller payout, as does 2 of 4, 3 of 5, etc. The more you catch, the more money you win. Catch too few and you lose.

The amount of cash you can win increases with the amount of numbers you select. Then again, so do the odds of winning the bet. The following pay table is based on Microgaming’s Online Keno game. It displays the numbers picked, required matches to win, corresponding payouts, and the long-term return to player (RTP) per selection.

Please note that Microgaming has one of the best Keno pay tables on the market. It is far more appealing than most land-based keno games – especially those hosted by any state, provincial, territorial or national lottery corporations. Their pay tables can be horrendous!

British Columbia’s BCLC Keno, for instance, pays out at an RTP of, at most, 75%, and that’s on a 1-number selection. Microgaming’s Keno has the same 75% for 1 number, but the odds get better – not worse – as you pick more numbers.

The following pay table applies to Microgaming’s online keno, offering up to 15 number selections per play.

Based on the table above, strategizing keno isn’t difficult at all. You only have to look at the RTPs on the right column to see which is the better bet. The higher the RTP, the better your odds of winning. In this case, selecting 13 numbers gives you the highest possible chance to win, delivering a 96.54% RTP.

Please understand that a 96.54% RTP doesn’t mean you have a 96.54% chance of winning. That’s not how it works. The RTP is the expected return, based on your overall investment. It is how much of your bets you can expect to win back.

As I said above, the popularity of this game among players depends entirely on your preference in gaming. If you choose games for the thrill, Microgaming’s online casino keno can be a very fun choice – just as entertaining and lucrative as the average online slot machine. If your looking for a game with a high RTP, there are far better choices on the menu.