Poker: The perfect meld of casino luck and professional skill. 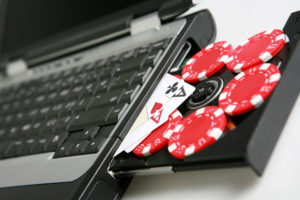 Poker is by far the most popular card game of all time. Over the centuries, it’s taken on many forms. From the old days of 5-card draw, to its current fandom as Texas Hold’em, there are myriad ways to play the game. But is it really a game, or is it a sport?

This controversial question has been debated for years, but never so much since the advent of modern technology. Poker was a niche-market casino game for decades, right up until the invention of the ‘pocket cam‘ in 1997. That’s when poker gained stardom as a televised event, giving viewers at home a glimpse into the calculable and psychological warfare that takes place among professional players.

Not long after that, the internet paved the way for online poker. Websites like Full Tilt Poker and PokserStars attracted millions of players to the virtual felt from all recesses of the globe. All of a sudden, Texas Hold’em was a household name. Not because family and friends gathered around the kitchen table to toss nickels, but because desktop computers all over the world were signing onto virtual, real money poker rooms.

This garnered the attention of federal governments in all major countries. Some moved to regulate, others to prohibit the activity. But throughout it all, that one lingering question remained.

Is poker a game of chance, or of skill?

The answer would effect the legitimacy of online poker in numerous jurisdictions – most notably in North America.

A multitude of professional poker players have voiced their vehement opinions that poker is, ultimately, a game of skill. They define it as a sport, in which every participant – dare I say athlete? – is capable of increasing his or her odds of winning based upon their skill.

It’s hard to argue that skill plays a significant role in poker. One’s knowledge of the game, combined with psychological awareness of their opponents and the ability to calculate odds and expected values in mere seconds, makes for a better poker player.

If Phil Hellmuth, the record holder of the most WSOP bracelets of all time (14), were to face off against an amateur player who knew little more than the rules of the game, that player would be decimated. They might win a few hands here and there, but in the end, odds heavily favor Hellmuth to destroy them.

Does Luck Of The Draw Make Poker a Casino Game?

The problem with calling poker a sport is that no player can control the shuffle or deal of the cards. In football, the quarterback’s skill controls the accuracy of the ball. In boxing, a contender’s physical prowess, power and reflexes are paramount. But the random nature of the deal in poker will ultimately effect who holds the best hand.

No mater how talented a player is, or how many championships they have to show for it, if the river blanks, they can lose just as easily as anyone come the showdown.

On the other side of the argument, however, a professional poker player can often win without having the best hand. Bluffing is something that the most respected players have molded into an art form.

Psychological warfare is a crucial aspect of the game. Convincing an opponent that you have the best hand, when in fact you don’t, can result in a win well before the showdown takes place.

The Debate Rages On…

Unfortunately, my opinion – your opinion – the opinion of poker players all over the world – has no bearing on the reality of the situation. The only ones who can truly label poker a casino game, based on chance, or a sport, reliant upon skill, are the regulators of those games.

Jurisdictional governments have the final say in the matter. And until a precedence is set, officially choosing one way or the other, poker will remain classified as a chance-based game, wherein typical, blind casino luck is considered the dominant factor.