Poker and casino games don’t have much in common, except that only the operator of the games is guaranteed to make a profit. Whether by skill or luck, all players have a chance to win. But for someone to win, someone else has to lose. And for casinos and poker rooms, it doesn’t matter who wins or loses, so long as it’s not them.

In poker, players compete against one another, not the house. The poker room makes its money by raking a small percentage of the pots. Because of this, poker is considered by most to be a game of skill. The player with the higher skill level will beat the player of lesser skill more often than not. Those few times when the lesser skilled player wins—that’s what we chalk it up to luck.

As for casino games, the rules and pay tables define a ‘house edge’. That edge is the percentage of all monies wagered that the casino can expect to win from its collective players. The higher the house edge, the more players can expect to lose.

Compared to poker, casino games always afford a negative expectation (i.e. all players can expect to lose). A poker player with enough skill—enough being more skill than his or her opponent(s)—can have a positive expectation.

One thing poker and the most popular strategy-based casino game of all, blackjack, have in common, is the expected value of bum hunting versus card counting. Although far apart in execution, these strategies are extremely similar in concept. 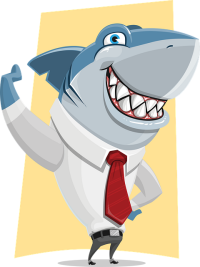 Since skill dominates in poker, the heavily skilled shark is going to pound away at the fish, taking all of its chips until the little fishy bum swims away to lick its monetary wounds. In this way, the veteran poker player is creating a significant positive expectation.

I mentioned above that casino games offer negative expectations—with one little exception. A professional blackjack player who is adept at card counting can invoke enough strategy to turn a profit with positive expectation. It’s not going to be nearly as positive or lucrative as online poker bum hunting, but it gets the job done.

Any other similarities we should know about? Yes!

Poker Rooms and Casinos can Kick You Out for Both

If you were thinking either of these paths to positive expectation were grand ideas, think again. If you happen to get caught doing either one, the operator has every right to give you a swift boot from the table, if not right out the door.

As you probably know, blackjack card counting is not illegal. However, in some jurisdictions, casinos are seen as private clubs, giving them the right to refuse service to anyone, for any reason. Get caught counting cards here, and you’re out. In other jurisdictions, you can’t be banned from the casino, but they can politely ask you to play a different game, or instruct the dealer to reshuffle after each hand.

In recent years, online poker sites have taken a similar stance against bum hunters. Who cares if one player is targeting another—it doesn’t hurt the poker room’s bottom line, right? Actually, it has. Fifteen years ago, new online poker players were pouring in from every direction. Then the poker bum hunters came along, and no one (except the pros) wanted to play anymore.

Those casual players are, in fact, every poker site’s bread and butter. Protecting their largest source of revenue became a top priority. Thus, the anti-online poker bum hunting campaign swept the internet. Just like blackjack card counters, bum hunters are now ejected from the tables as soon as they’re detected.