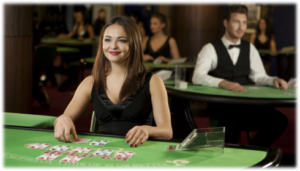 The year is almost over. As we make holiday dinner plans and hang tinsel over the fireplace, some of us have more reasons to celebrate than other. In particular, anyone who works for the live casino software group, Evolution Gaming. I imagine they’ll all be receiving especially generous Christmas bonuses this year.

Last month, Evolution released its interim report for January-September 2017. Within that document, the company boasted a phenomenal increase in revenue. For the third quarter (July-September 2017), Evolution saw operating revenue climb to €45.7 million. That’s a 56% year-over-year (YoY) increase, up from €29.2 million in Q3-16.

In its report, Evolution Gaming acknowledged several key factors that contributed to the company’s immense success in 2017. Among them were the popularity of their newest live dealer games, and the expansion of live casino studios into new markets.

In April, the interactive gaming giant announced a major breakthrough in the live casino industry. The company secured a rare contract with gaming regulators in British Columbia, Canada. Evolution was their selection to build a new, state-of-the-art live gaming studio in Metro Vancouver.

Set to open before 2018, the studio will host live dealer casino games for BC’s provincially regulated online gaming website, Playnow.com. This marks the first time Evolution has spread its wings beyond the European market.

In July 2017, the company began construction on its ninth live casino studio in Tbilisi, Georgia.

Evolution Gaming has been the number one provider of live dealer casino games since their initial launch in 2006. Their superiority has been proven time and again, named EGR’s Live Casino Supplier of the Year for 8 years straight (every year since the inaugural 2010 EGR Awards).

Then in October, the company was bestowed with yet another prestigious award. Evolution’s new Dream Catcher game was G2E’s Digital Product of the Year at this year’s Las Vegas expo. It’s unlike any other live dealer product, historically consisting of table games like blackjack, baccarat, roulette, etc.

Dream Catcher is more akin to the Big Money Wheel found in land-based casinos. Diverting from the standard table games set-up was a huge risk, but it came with huge rewards for its ingenious developers.

“Dream Catcher, the latest addition to our game portfolio, continues to gain ground as a popular new game format for a target audience that has not traditionally played Live Casino,” writes Evolution Gaming CEO Martin Carlesund in the report.

“We are very pleased with how this has been received and, as an additional achievement, the game was recently named as Digital Product of the Year at the G2E Global Gaming Expo in Las Vegas,” said Carlesund. “Dream Catcher certainly has delivered beyond our expectations.”

As for the future, he confirmed that “product innovation” will continue to be at the forefront of their success. The company plans to continue expansion into regulated markets and land-based casinos, following great “progress in all of these areas”.