The long-awaited Phantom of the Opera Slot, in development by Microgaming since February, is finally set to launch in the first week of November 2017. 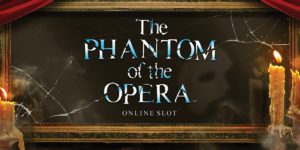 Months ago, the world’s leading interactive slots developer, Microgaming, announced a very unique contract. The company inked a deal with The Really Useful Group, giving them rights to develop their first online slots game based on a musical play. The most famous musical of all time, in fact. That’s right, I’m talking about The Phantom of the Opera.

Nine months later, following a palpable buzz of anticipation, The Phantom of the Opera Online Slot is finally slated for release. It will be integrated at all Microgaming-powered online casinos in just a matter of days.

The game is based specifically on the 2004 film adaptation, starring Gerard Butler, Emmy Rossum and Minnie Driver. This gave Microgaming access to genuine footage and the original musical score by author and composer Andrew Lloyd Webber. All has been incorporated into a feature-rich game that’s sure to captivate slots fan, just as it has more than 140 million audience members worldwide.

The Phantom of the Opera Online Slot 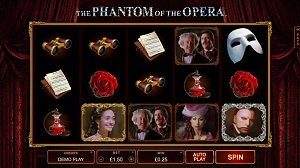 The new Phantom slot has 5 reels and 243 ways to wins. The graphics are so sharp, it’s almost as if you were watching the movie itself. Any fan of the musical will surely appreciate all the hard work that went into its development.

The game’s higher paying symbols include all of the main characters from the film; the Phantom (Gerard Butler), Christine (Emmy Rossum), Raoul (Patrick Wilson), Carlotta (Minnie Driver), and the duo of Firmin and Andre (Ciarán Hinds and Simon Callow). On the lower end are a rose, binoculars, perfume and music sheet.

There are a few other symbols that trigger special features in the game. One is the Phantom’s mask. It’s a bonus symbol that awards a Player’s Choice feature whenever 3 or more appear anywhere on the reels. Choices include the Music of the Night Feature, Masquerade Feature, or All I Ask of You Feature.

Music of the Night Feature: “Enter the Phantom’s domain where anything can happen”. Players start with 10 free spins. The Phantom can appear stacked as a 2x multiplier wild. The game’s logo can appear as a wild in multiple locations. The feature may award extra free spins at random.

Masquerade Feature: A multi-level pick’em bonus game that starts with seven masquerade masks. The player chooses 3 masks to reveal instant credit prizes. If the player reveals a prize with a ‘Level Up‘, they will win extra picks and move on to the next level, with new masks and higher prizes.

All I Ask of You Feature: 10 free spins with Christine and Raul acting as wilds who dance across the reels on each spin. They can appear as a single position wild, or stacked upon a full reel each. If they come together as one symbol, they become a wild with a 3x multiplier. 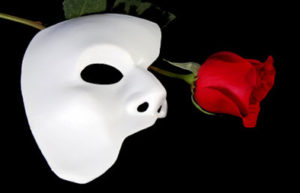 There’s also a special symbol that can only appear on the 5th reel. It’s a mysterious letter from the Phantom, triggering the Phantom’s Favor Feature when it appears. The letter will open, revealing an instant prize worth up to 20x the total bet.

Another feature, called the Dramatic Drop, can activate at random during any spin. When it does, the iridescent chandelier will fall from the ceiling, crashing to the bottom of the screen in a crystalline firework display. As the reels come to a stop, up to three of them will be stacking Wild symbols.