Novomatic’s new Bank or Prank Slot a hit or total ‘bomb’ for players? 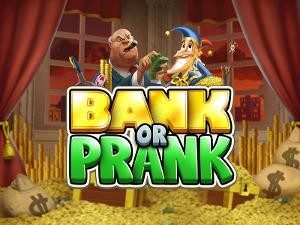 Every month, we are pelted with a throng of new online and mobile slots games from today’s hottest developers. Today, we’re going to take a close look at a brand new release from Novomatic, introduced on the company’s StakeLogic platform. They call it Bank or Prank, and one of its most unique features could cause it to ‘bomb‘ with players.

The new Bank or Prank Slot has a lot going for it. There are wilds and two bonus features, including free spins, to play for. It’s a ‘Crazy Wild‘ game, but much like the fascinating hit Deal or No Deal, the banker giveth, and he taketh away!

Let’s take a closer look, and you’ll see what I mean.

Bank or Prank is a 5 reel, 243 ways to win game with a stake range of $0.40 to $40 per spin and a max 72,900 coin payout. Graphically rich, it has a stately, Olympus-style background with stone-carved lions and pillars, paired with catchy tunes and cha-ching sound effects. 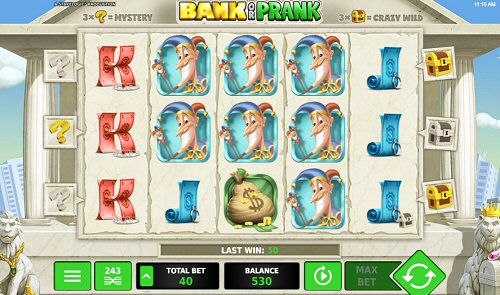 The higher paying standard symbols include the Bank or Prank Slot logo, the cheeky banker, a mischievous joker, armored truck and bag of gold coins. On the lower end are colorful playing card values of 10 thru A, all cleverly designed from cash notes.

There are four special symbols you’ll want to look out for in the new Bank or Prank Slot. Three are good, but one is bad.

Wild Coins
The gold wild coin is – of course – the wild. It substitutes for all standard symbols to build winning combos, and can appear stacked up to 10 times on any reel.

Mystery Symbols
Mystery symbols look like a question mark (?), and have a special function. They only appear on reel 1, attached to standard symbols, and will light up the adjacent “?” left of that reel. When all three ?s are lit, the player receives an instant credit Mystery Prize.

Crazy Wild Symbols
These are treasure chests, and they only appear on reel 5. Much like the Mystery symbols, Crazy Wild symbols appear attached to standard symbols, and light up the adjacent treasure chest to the right. When all 3 of these light up, it triggers the Crazy Wild Game.

The player receives 10 free spins. At the start of each free spin, wild symbols will appear in random locations across the reels. These wilds lock into place for the duration of the free spins, giving players more and more chances to line up big wins as the free games progress.

Bomb Symbols
Did I mention there was a bad symbol in this game? This is it! The Bomb symbol only appears attached to standard symbols on reels 1 and 5, and when it does, it counters the effects of the Mystery and Crazy Wild symbols. When a bomb appears next to a lit ? or treasure chest, it will explode, deactivating that symbol.

I haven’t gotten too many chances to play this game yet, as it was just released yesterday. I have to say, the bomb aspect does give it an extra element of excitement. It’s kind of like the old Whammy TV game show. With two treasure chests lit, I actually found myself chanting, “No whammies! No whammies! No whammies!”

Exciting or not, the fact that the bomb eliminates what players are trying so hard to achieve is a disappointment. Slots don’t normally work this way, and I’m not sure players will take very well to it.

Novomatic is taking a big risk producing the Bank or Prank Slot. Only time can tell if it will be a hit, or an ultimate bomb.