How to Play Twisted 21 Blackjack w/ Rules, Odds & Side Bet

I find it rather amazing just how many different blackjack variants have graced the tables of casinos all over the world, both online and on land. You’d think they would run out of ideas after a while, but no – they just keep on coming! And I’m referring only to the ones that actually make it passed the trial phase; the ones people enjoyed enough to reserve a precious, long-term spot on a casino’s gaming floor. 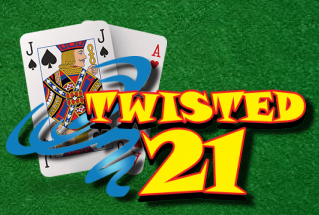 I recently learned of a new blackjack game at the Rio Las Vegas called Twisted 21. The game has been present in the casino since its trial began in July 2019. From what I understand, it’s still undergoing review 18 months later, at time of writing. It’s an interesting game, and one that I believe will achieve introduction across a wider platform. Being so unique, it’s understandable that they’re taking more time to work out any kinks before an official launch can occur.

How to Play Twisted 21 Blackjack

The rules of Twisted 21 seem to be finalized a this point. We’ll know for sure if and when its creators at 21Stud Gaming move ahead with a full-scale license and launch. Until then, here’s what we know:

The object of the game is the same as any standard blackjack variant. The player strives to achieve a hand total higher than the dealer’s, without exceeding 21. However, no hand may exceed 5 cards, splitting is not allowed, and it’s possible for the dealer to stop short on 16 or below.

Let’s have a look at the rules set this blackjack game apart from the standard variety.

All of the usual blackjack rules come into play, except for these unique alterations:

This is where the game gets even more “twisted”. The Twisted Stud Bonus is an optional side bet that is determined by the player’s 5-card poker hand; comprised of all five cards he was dealt, irrespective of whether all five cards were used during play-through of the blackjack hand.

To put it simply, if you place the side bet, once the blackjack hand is over, you’ll pull all five of your cards together and make a poker hand out of it. Whether or not, and how much, you win is determined by the following pay table.

There are a few things you need to know before you play this game.

First of all, at time of writing, it can only found at the Rio Las Vegas in Nevada. It’s last know location was reported to be a single table, situated in the pit between the craps table and the hallway leading the convention center. Please leave a comment below and let us know if you find it elsewhere.

The game doesn’t come cheap. Then again, so few blackjack games do in Vegas anymore. The table stakes for Twisted 21 range from a minimum of $10, up to a maximum of $2,000. The

It pays to haggle…

Because this game is still in its trial phase, players have been known to successfully argue unclarified rules. For instance, more than one player has reported being paid twice on a single Twisted Stud Bonus side bet; once at 20 to 1 for totaling 16 or below, and again at 3 to 1 for having Two Pair. Other players have said they tried it, and were denied.

It would seem the dealer and/or pit boss in charge at the time has a lot to do with which rules are and aren’t adhered to. Such is the nature of trial-phase casino games like Twisted 21 Blackjack. My advice would be to read the current rules sheet provided and argue any point that’s unclear, should it benefit your bankroll to do so. don’t be a pest if you fail, but it’s worth a shot.