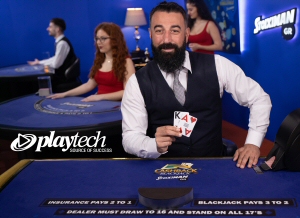 Live dealer casinos are one of the internet gambling’s markets fastest growing verticals. They’re not new by any means, having been around for more than a decade already. But advancements in technology, combined with recent global events, have made these games so much more appealing than ever before. Playtech and other major live casino producers are capitalizing on that fact with a steady influx of new titles.

The latest creation to hit the live gaming market is Cashback Blackjack. It’s an intriguing variant of 21 that gives players the option to cashout prior to a hand’s completion. At almost any point in a game, a player can opt to take a cashout. For now, though, this new live blackjack game is only available in the Greek market.

On Monday, Playtech—creator of the rules for Cashback Blackjack—announced the official launch of this new live dealer variant in collaboration with GML Interactive—owner of the Greek iGaming brands, Betano and Stoiximan. According to a press release, the two worked very closely on developing a live version of the game, previously available only in RNG (computer generated) format.

“The development of Cashback Blackjack Live has been a truly collaborative effort, and takes our partnership with Stoiximan/Betano to a new level,” said Edo Haitin, CEO of Playtech Live. “Stoiximan/Betano is already one of the leading operators in the Greek market, and we’re committed to working closely with them to not only build on this position, but also extend that success into further territories.”

Haitin goes on to comment on the success of the Cashback concept in the gambling arena. He calls it a concept that is “well-established in sports betting” already. “We’re very interested to see how players will respond to it in a live casino setting, where there’s interaction with a dealer and other players.”

Stoiximan/Betano live casino manager, Christos Mavridis, shared similar enthusiasm for their extending partnership with the live casino studio. “Having worked closely with Playtech for some time now, we were well aware of their track record in producing innovative new content and game variants,” he said. “As such we felt they were the ideal partner for the development of Cashback Blackjack Live, and we’re sure our players will be just as impressed with the finished product as we are.

“We’ve already seen a fantastic response to Cashback Blackjack as an RNG game,” Mavridis continued. He expressed his company’s excitement as they begin “delivering a new experience for our players with the first Live version.”

Live Cashback Blackjack in a Nutshell

There’s very little difference between how to play Live Cashback Blackjack, versus the original RNG-based version. Aside from the fact that it’s live, the only rule change employed was diverting from a 6-deck to 8-deck shoe. The rules make for a decent RTP of 99.55%.

The game is played just like traditional blackjack, except one major difference. When it’s a player’s turn to act, they will almost always be given the option to “Cashout”. For example, once the player has their first two cards, their typical options would be Cashout, Hit, Stand, Double, or Split. If a player splits, they will have the option to cashout on both hands. Cashout is not available, however, after Doubling.

The value of the cashout will always be based on the realistic probability of winning or losing. Those odds are based on the player’s current hand, relative to the dealer’s up-card. The more likely a hand is to win, the higher the cashout payoff will be. Low odds of winning will pay back a respective fraction of the original bet.