The MPN is hosting its UCOP tournament series with €500k GTD across 112 events now through February 10, 2019, plus multiple prize packages to live festivals and online tourneys. 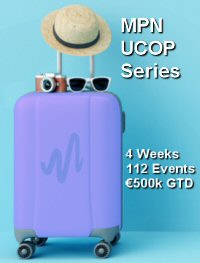 MPN is at it again, hosting its Universal Championship of Poker (UCOP) tournament series. There’s a half a million in guaranteed cash prizes to be awarded, and a throng of live and online poker packages to be won. It’s all part of the UCOP Passport and UCOP Mini tournaments taking place right now at MPN-powered online poker rooms.

All told, there will be 112 events in the tournament series; 56 UCOP Passport events, and another 56 UCOP Mini events. We’ll talk more about those in a moment. But first, let’s take a look at the prizes for the top finishers on the…

Finishing high enough in any UCOP event will earn players points towards their position on the UCOP Leaderboard. The more points the better, because the top 20 finishers have a lot to look forward to. They may even find themselves traveling across Europe before the year is out.

The top finishers on the UCOP Passport Leaderboard will receive one or more prize packages to any 2019 MPN Poker Tour festival of their choosing, and/or online tournament tickets worth anywhere from €22 to €550 in buy-in power.

According to MPN, the prizes and/or prize packages for the top 20 points earners are as follows:

For any players who find the UCOP Passport series buy-ins a bit too steep, there’s no need to worry or over-stretch your budget. The UCOP Mini tournaments are just for you. This special series mirrors all 56 UCOP Passport events, but in 1/10th scale. The buy-ins, prize pools, and leaderboard point values are all set at exactly one-tenth of the larger Passport event series.

UCOP Mini tournaments got underway on Sunday, and will continue through January 27. Then on January 28, the larger UCOP Passport events begin, and run through February 10, culminating in the MPN Tournament of Champions on February 17, 2019 at 18:00 GMT.