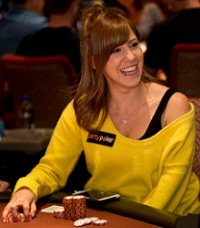 Kristen “krissyb24” Bicknell has done it again. For the second year in a row, she’s claimed top honors as the poker world’s most successful female player. Last week, after finalizing the best 12-month performance of her illustrious career, Bicknell was named the 2018 GPI Female Player of the Year. She crushed the competition in 2017, as well, and just barely missed out on the same title in 2016.

Following the announcement from Global Poker Index (GPI) organizers, Bicknell told the media she is “honored to win female POY” for the second year in a row.

“I sincerely hope that my presence in tournament poker is able to make a positive impact on the public perception of women in poker. A large part of what motivates me to compete at the highest level is to represent women and prove that men and women are even competitors in the game.”

For about a decade, Kristen played poker primarily online. Rarely did she venture into the live realm. Doing so, however, scored her a WSOP bracelet in 2013. It was shortly after this time that the online poker industry began gearing promotions toward recreational players, leaving their pros with a lot to be desired.

In 2015, she decided the live poker scene would benefit her more—and it did. She snagged a second WSOP bracelet in 2016 and has dominated the live felt ever since, depositing more than US$2.6 million in the bank. That includes yesterday’s 11th place finish in the $25k PCA Hold’em Players Championship, worth $328,500; the largest live cash of her career to date. That placement, by the way, was worth 410 GPI points towards her 2019 POY ranking.

Commenting on her performance throughout the last 12 months, Bicknell says, “I had a lot of deep runs, though definitely a ton of disappointing finishes. I feel that I have improved drastically throughout the past year, and am so grateful for all the opportunities and experiences that I had. I got to play numerous high roller events that I haven’t played in before, and I really enjoy playing at that level.”

No doubt, we’ll see a lot more of Bicknell in the high-roller arena this year. 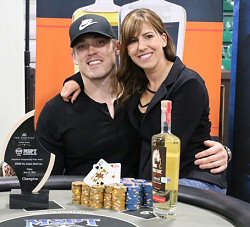 Anyone who follows the poker world deeply enough knows that Kristen Bicknell is dating an equally famous colleague by the name of Alex Foxen. They’ve been dating for a few years now, and one of the things that keeps their relationship fresh is a little healthy competition between them.

In June 2018, Bicknell and Foxen faced off heads-up in the grandest of grand finales at the MSPT $5k DeepStack Championship in Las Vegas. Foxen ended up taking the 1st place prize of $239k, while Bicknell scooped $200k for 2nd.

And in the most ironic finish of them all, while Kristen is collecting her second Female Poker Player of the Year Award, it was her significant other, Mr. William ‘Alex’ Foxen, who won the overall 2018 POY Award.

Congratulations to you both, and here’s to another great year!